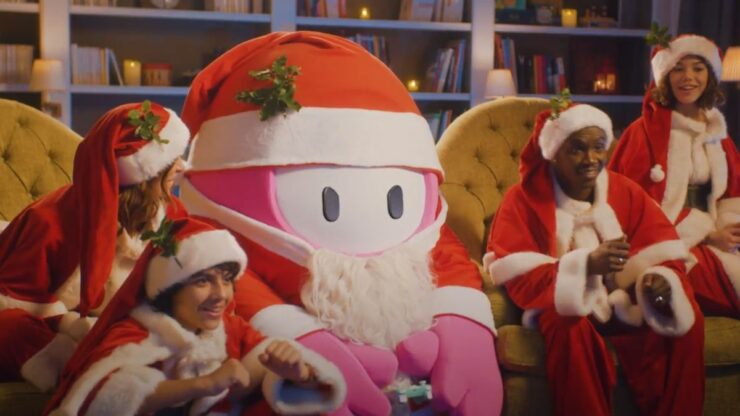 'Tis the season for holiday-themed commercials. We've seen Halo ads and other kinds of holiday cheer as 2020 winds down. But the latest addition to the wave of candy cane-laden ads is this real-life Fall Guys: Ultimate Knockout ad, which proves just how cute those little (er, large) jelly bean boys can really be.

The commercial opens on a pink Fall Guy waking up on Christmas morning and meeting its family, decorating the tree. There's a crown on the tree, and you know what that means. Cue the Fall Guy attacking the crown, while the family looks on in horror. But it's back to business as usual soon enough, as there are presents to unwrap and cheer to spread.

From all of us at @Mediatonic and @DevolverDigital...

We'd really like to thank you all for your support this year!

We've gifted you all a little something for the holidays 🎁🎅

Devolver made a live-action Christmas ad for the occasion... pic.twitter.com/yNxApzsgap

By the end of the ad, we've seen the Fall Guys interacting with their families and spending time spreading joy for the holidays. And as it turns out, they're actually all very adorable. They also have a Christmas present for you: a free Santa skin.

We awarded Fall Guys: Ultimate Knockout an 8 in our review.

"Fall Guys is an excellent chaotic multiplayer game that can be played by people of any skill level, and that is its greatest strength. Sadly repetition has well and truly set in after several weeks of play, but if the developers at Mediatonic keep dishing out updates and new content on a regular basis, this could be just as influential and essential as Rocket League."

You can snag the Santa costume now and get ready for a colorful Christmas season. Just because it's time for families and joy this season, that doesn't mean you can't keep running into your family in Fall Guys.