The card has a total of 768 Cuda Cores, 384 from each core clocked at 850Mhz. The card features a total of 2GB GDDR5 memory bus running at 4008Mhz along a 512-bit wide memory interface, Total memory bandwidth equals to 256.6Gb/s while Shader clock is maintained at 1700Mhz.

The Geforce GTX 560Ti 2 Win is relatively longer than the Geforce GTX 580 due to a dual chip PCB design covering a length of 11.5in. The two chips along with Memory and VRM area is cooled by a large aluminium heatsink equipped with heatpipes while air flow is provided by three fans. The GPU is powered through two 8 Pin connectors.

Performance of the card is 30% higher than the reference GTX 580 or comparable to the GTX 590. EVGA published some benchmark slides on the GPU front page which include 3D Mark 11 and Unigine Heaven DX11, Details below:

Display ports include 3 DVI + 1 Mini HDMI which allow for 3D-Vision support out of one single GPU. The EVGA Geforce GTX 560Ti 2 Win is available for $519.99, For more information head over to the official page here. 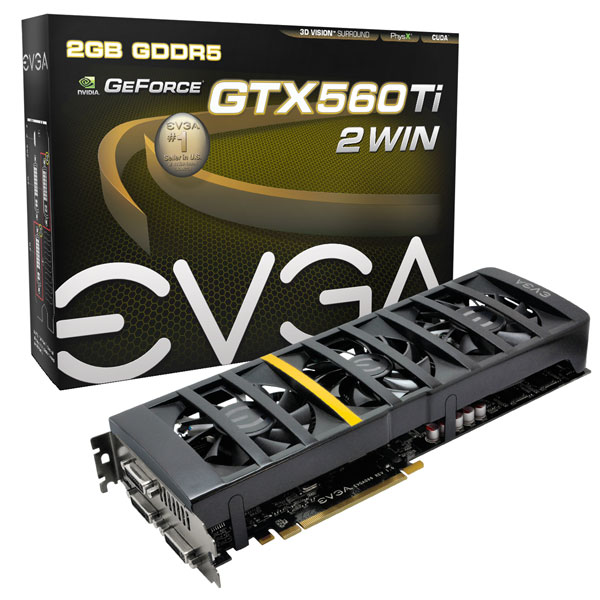