EVGA has finally unveiled their beastly creation, the GeForce GTX 980 KINGPIN ACX 2.0 graphics card which comes with a large amount of features aimed towards overclockers and enthusiasts. EVGA has always made powerful designs with their KINGPIN edition cards and GeForce GTX 980 is another step for EVGA to prepare high-performance graphics cards for the most insane overclockers out there.

The GeForce GTX 980 KINGPIN ACX 2.0 is rocking a custom designed PCB which is meant to be pushed to the limits. Under the hood of the enormous beast, the GM204 GPU features 2048 CUDA cores, 128 TMUs and 64 ROPs. The memory featured on the card is the standard 4 GB GDDR5 VRAM scattered across a 256-bit wide interface that is clocked at 7.00 GHz effective memory clock. The core clocks are maintained at 1291 MHz at the base clock and 1393 MHz at the boost clock. The GPU pumps out 224.3 GB/s bandwidth and features all impressive features introduced by Maxwell such as NVIDIA 4K DSR, MFAA, G-SYNC, DirectX 12, etc. The specs may not  be much except the factory overclocked core clocks but the design of this card is what will matter the most to users.

As expected, the custom design of the EVGA GeForce GTX 980 KINGPIN ACX 2.0 comes with a handful of new and modified components. The PCB features a 14+3 Fully Digital VRM to enhance stability, efficiency and the overall power capacity of the board while running at a low temperature that averages around 28C. The PCB itself is made up of 12 layers of copper for smoother power delivery and adds more strength to the overall design of the board. Power to the board is supplied by two 8-Pin and a single 6-Pin connector which sounds crazy for any single chip card but the design featured on the EVGA KINGPIN cards can actually convert that large amount of extra juice into usable power and performance for the graphics card. The whole PCB comes with a memory and MOSFET cooling plate which offers direct contact with both components to reduce the temperatures. There are two stacks of the cooling plate for each component to allow easier access to better cooling through liquid or LN2.

EVGA has also made access to soft-wired onboard thermal sensors which provide realtime overclock tuning to achieve high overclocks while the card itself comes with a triple BIOS design with Normal/OC/LN2 mode option at hand. Lastly, there's the handy EVBot onboard connector which allows tuning and control to several options from a standalone EVBot device.

The cooling design of the card is just as impressive as the PCB design with the card measuring 5.49" in height, 11" in length and occupying just two slots for 4-Way SLI compatibility on boards that support it. The card is designed to be a dual slot but the exhaust bracket can be removed to turn the card into a single slot design which is a cool addition for the KINGPIN series allowing LN2 or liquid cooling users for easier accessibility when using multiple cards. The card comes with the latest ACX 2.0+ cooling design that has a metal shroud with dual double ball bearing fans that has longer lifespan and consumer lower watts compared to standard sleeve bearing fans. Just like several other brands, EVGA now offers with their fans the ability to turn off when the load temperature is under 60C. There's also an exclusive KINGPIN backplate that is backlight and offers full control over brigthness and color options. The cooling under the shroud is provided by a large straight heat pipe design that run through a dense aluminum fin array.

The EVGA GeForce GTX 980 KINGPIN ACX 2.0+ is available for pre-order at EVGA at a hefty price of $749.99 US. EVGA is asking a $200 bucks premium cost over a reference GeForce GTX 980 for the features they are offering on their cards. The card has so far been overclocked as high as 2.2 GHz on core and 8.9 GHz on memory that is showcasing it's overclocking potential.

When we say this card is offers unbelievable overclocking, we mean it. Vince “K|NGP|N” Lucido was able to take the GeForce GTX 980 GPU to new heights at over 2200MHz GPU clock and 8900MHz memory clock on Liquid Nitrogen Cooling. EVGA 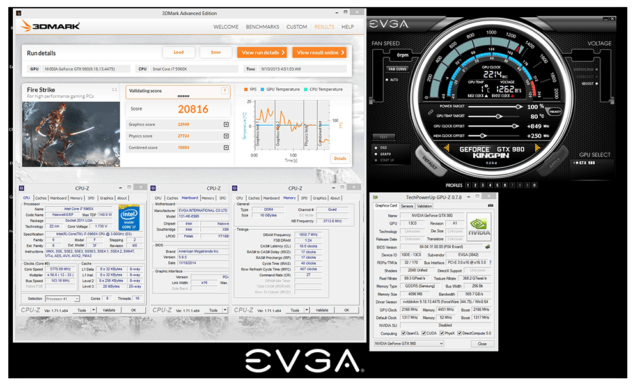