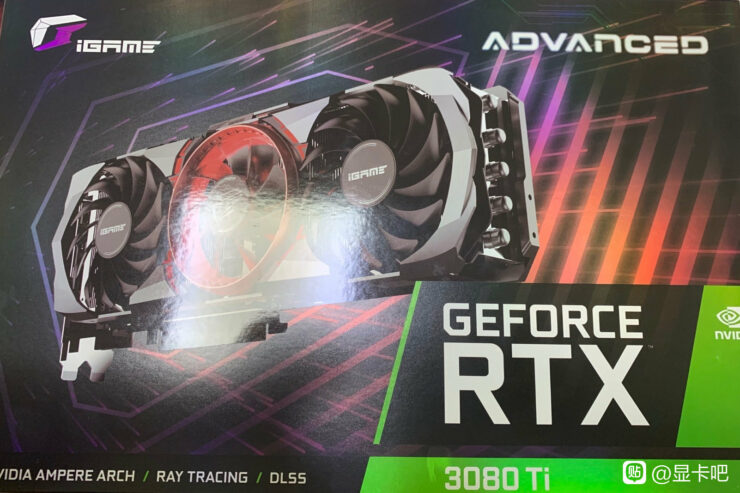 Videocardz appears to be maintaining his unbroken streak of leaking pretty much everything before a launch. Box art and images of custom RTX 3080 Tis by ZOTAC, Colorful and even Lenovo have been leaked by WhyCry. NVIDIA is expected to announce the RTX 3080 Ti and RTX 3070 Ti in the live stream tomorrow and the GPUs will be available to buy by the 3rd and 10th of June 2021.

First up we have the Colorful iGAME ADVANCED RTX 3080 Ti GPU which featured that impressive-looking 3 slot cooler. While we do not know the clock speeds on this baby, we do know that you can expect even crazier designs with the KUDAN lineup. On the other hand, the ZOTAC family divided into the AMP Holo and Trinity families. AMP has historically been the highest clocked variant while Trinity is the standard, non-OC variant. Trinity will be clocked at the reference clock speed of 1665  MHz but AMP could be anywhere from 50 MHz to 100 Mhz over this number. Both rock 12GB of GDDR6X memory.

Finally, we have GPUs from a new AIB: Lenovo. Lenovo calls these cards the RTX 3080 Ti Legion and while its going to be hard to find these cards on the shelf, we have a feeling we will be seeing a lot of these in OEM builds. The cooler profile is also upgraded from two slots to three slots - something which will help in dissipating the heat buildup of the 350W GA102-225 GPU.

Both of these graphic cards are currently expected to be announced on May 31 with a launch expected by 3rd and 10th June respectively. It would also be very interesting to see how much NVIDIA cripples mining performance on these cards. If they manage to cripple it to a large enough extent, we might just see these cards available for close to MSRP from AIB and retail partners although I wouldn't hold my breath about it.