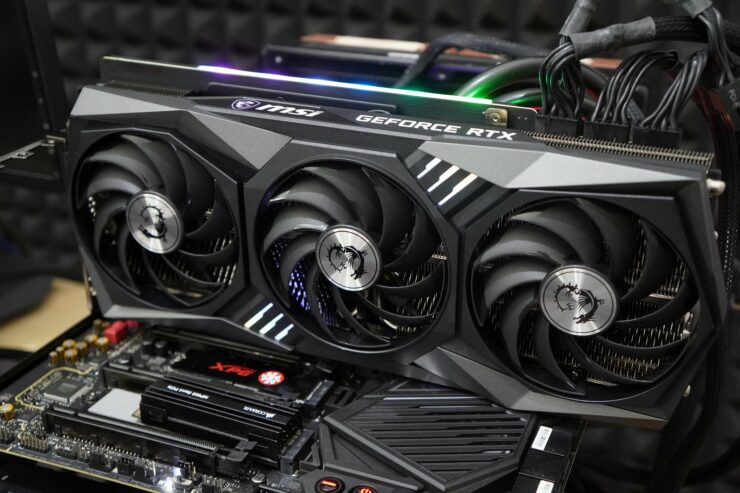 Cryptocurrency has proven to be the bane for DIY gamers in the PC segment. Coins like Ethereum have driven GPU prices 3-5x the MSRP for most cards and scalpers have added fuel to an already delicate situation. The end result is that gamers cannot get their hands on any GPU unless they go through an AIB waiting list procedure (which can take multiple months) or buy a multiple generations old, second-hand GPU. In an attempt to curb this and make GPUs available for gamers, NVIDIA introduced the LHR or limited hash rate series with the RTX 3060. Their upcoming flagship GPU, the RTX 3080 Ti will also be an LHR variant and the mining performance of this card has been tested for the first time.

The mining performance of the upcoming RTX 3080 Ti has leaked out from Kavka_Chow (via Videocardz). The card yields 58.04 MH/s on Dagger Hashimoto. To put this into perspective, the last generation flagship, RTX 2080 Ti yields 49 MH/s and the non-limited RTX 3070 yields 96 MH/s. Clearly, this is a massive reduction from its full potential which would have been over 100 MH/s.

So the hash rate limiter works (for ETH based coins at any rate) and is there so the next question becomes just how much will this impact GPU pricing going forward? This is where this articles the territory of (educated) speculation. I am personally very pessimistic about pricing getting significantly better for a couple of reasons and expect to see only a 10-30% reduction in current pricing and nowhere near the MSRP.

The RTX 3080 Ti will have 80 SMs for a net total of 10240 CUDA cores. The maximum frequency achieved by the graphics card is also given - which is 1.67 GHz. With these two confirmed specifications, we can arrive at the TFLOPs number for the card - which is a resounding 34.2 TFLOPs. That is an absolutely insane level of graphics horsepower although it remains to be seen just how much of that will translate to actual FPS in games.

The card has 12GB of GDDR6X memory clocked at 9.5 GHz (19 Gbps) and mated to a 384 bit bus width would feed that massive graphics engine with 912 GB/s of bandwidth.

As always, NVIDIA is going for a staggered launch with the flagship hard launching on the 3rd of June. The announcement should happen earlier - likely by 31st May

The RTX 3070 Ti is going to be available on shelf almost a week after its older brother. Reviews are going to go live a day before.