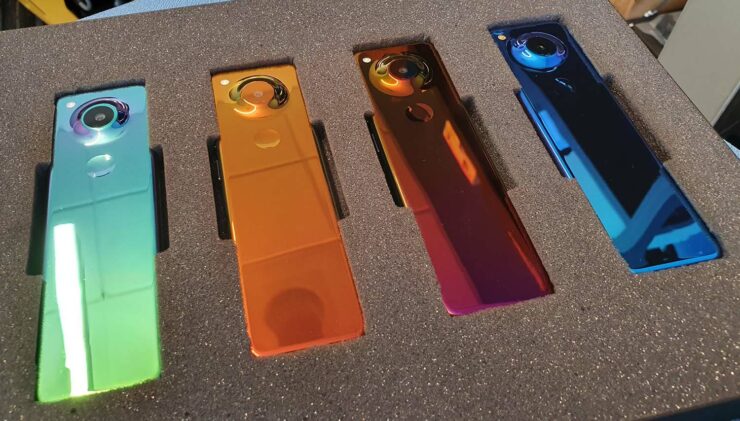 Andy Rubin earlier relied on Twitter to provide a teaser of the Essential PH-1, and now, the co-founder of Android has taken to the micro-blogging social network once more to show off his latest creation. In short, it’s one of the strangest mobile devices you’ll ever come across, assuming it is a mobile device in the first place. Have a look and you’ll know exactly what we’re talking about.

Rubin Provides More Details in His Tweets, Talking About a New User Interface for a Unique Form Factor

In the first image, Andy Rubin shows off four devices placed face-down, revealing a large rear camera, along with four models with different gradient finishes. One peculiar thing about all four devices is that they are much taller than an average smartphone display, and luckily, the founder of Essential shows off the front of these devices too. While the device itself looks compact, it boasts an abnormally tall screen; much taller than what other manufacturers are attempting to churn out of their production facilities.

According to the Android co-founder, the new UI of these devices will cater to a completely new form factor, meaning that it might not be long before we get to see what the executive has in store for us. Earlier, Essential was taking applications for software engineers and designers, suggesting that the selected candidates could be working on optimizing the UI for one of these. It was also reported that the company was working on a separate mobile device, and apparently, it would be powered by Qualcomm’s Snapdragon 730.

The device in these images appear to be running Google Maps, and as far as we can tell, there’s a front-facing punch-hole camera present on the left-hand side of the handset. There’s also an earpiece grill at the top, with uniform bezels on all four sides. These small details hint towards a fresh new mobile phone, but currently, it’s unconfirmed if what you’re seeing in the images will be launched as an Essential-brand smartphone or something else entirely.

Like always, we’ll keep you updated on other surprises Andy Rubin has to happen and in the meantime, let us know what kind of device you think you’re looking at down in the comments.