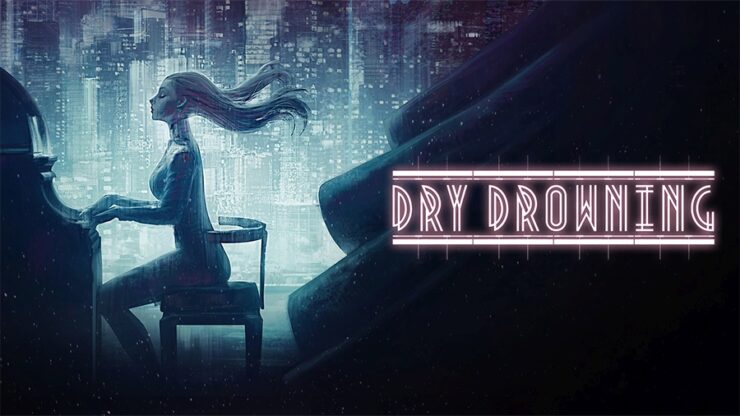 Sometimes it's hard to defend something within a game, even one in the early stages where the issue could be fixed by the time consumers have it. Even if the game is from a small indie studio and one that may not have even considered the issue, due to the small subsection of the audience it could affect. In this case, the game is Dry Drowning, developed by Studio V and published by VLG Publishing. The issue in this case: No resolution options or an easily accessible ability to play the game in a window, making my time with an early hands-on challenging.

At least it was a challenge for the first few hours. Mine was a simple issue - due to me playing on an Ultrawide monitor, the images of the game were fine but what happened is the UI and Overlay actually expanded off of the screen. I understand that not every game will support ultrawide monitors. Some game types are distinctly not suited for them, such as the visual novel, which is exactly what Dry Drowning is. With most visual novels you're going to find yourself with stretched images, black bars or simply playing the game in a window. The latter two are fine by me, so long as the game sticks within the confines of the area it sets.

I aimlessly fumbled around as a boy would with his very first lover, trying very hard to find that magical spot which would allow me to achieve my goals. In this case, I wanted to be able to play the game properly and actually pass a certain section of the game where a clue was off-screen, making it unselectable and impossible for me to move further in the game. I tried launch commands, alt+enter, looking for options in the game's files and even just shouting at my computer. Nothing worked. Then two solutions presented themselves. I sent a message off explaining my problems and while waiting, I fumbled into success - much like the aforementioned boy - and adjusting the resolution of my desktop actually fixed the problem. Also, then I got a reply saying that if I held ctrl while launching the game, I could play in windowed mode.

Huzzah! Now let's get onto the murdering of innocents and the stabbing of an arrow in a woman's gaping neck wound. Maybe some framing of politicians, corporate sabotage, solving of crimes and the little choice of saving a sexy, sassy, detective or not. If that isn't enough, there's more!

Once you get into the game, there's a lot to enjoy. This surprised me more than anything because I can't honestly say I'm a huge visual novel fan. The ones I'm aware of usually require one hand being free and getting into a comfortable position. Because you're resting on that hand and want to be comfortable to go to sleep, of course, you filthy-minded people! Genuinely, I can't say I've enjoyed most visual novels but this offers something a little different and unique, thanks to the setting and story. The characters help too.

In this case, you're playing as Mordred Foley, a disgraced, down-on-his-luck detective in the city of Nova Polemos in the year 2066. This is a city where the rich and powerful rule all, private companies run rampant and police brutality is celebrated, particularly against non-whites. Hell, the motto of the police service is "Hic sunte Lupi" which translates to Here are the wolves (Google translate says it should be Hic sunte lupes - but I'm not going to argue, I'm from Yorkshire, we barely know English).

Mordred also has a fairly unique ability. Whenever somebody lies to him, strange things start to happen in his head (and on your screen) and the persons face is replaced by a mask. This mask, while they're telling lies and you prove their lies wrong, will slowly diminish. You don't get unlimited attempts though, with you essentially having three strikes, depicted by quite unnerving eyes flying around Mordred's head. You'll find yourself looking through evidence found in your cases, including things found in the past and present, to help work through the lies of those you're investigating.

The setting, characters, investigations and conversations in the game makes Dry Drowning one of the few visual novel titles I can honestly say I've enjoyed playing so far.

From gruesome murders to surprisingly thought-provoking and game-changing decisions. Spoilers, but one decision has you deciding whether to allow somebody to upload a virus which will essentially destroy the system that permeates the city. The system manages communication, preserves police records and is - big spoiler - keeping an android alive. Do you allow this to happen? There are significant benefits to you or do you stop it from happening. I picked the first and noticed consequences right away in the loss of historical case files.

Each chapter holds a different case - how long the game is I don't know, but on the official website, it states that the game has more than 20 hours of gameplay. For that matter, here are some of the features that are listed on the site:

I have to agree on the elaborate clue and documents system, the use of them as you're working out the clues of the story yourself is great. You genuinely have to think about what you're going to use in an interrogation too. Remember, three strikes and you're out. Granted, it's a game so you get to simply click continue in the game over screen.

If I had an issue with what I've played so far, finding the clues at times has me feeling like I'm playing the traditional adventure-game mini-game of wafting my cursor around the screen, hoping to find the thing that activates. It's genuinely the only way I've been able to find a few clues. Still, with that being the worst thing I've encountered (after I got the game actually working properly on my screen) then I truly can't complain.

The real take from this is that Dry Drowning has a story, world and characters that has engrossed me so far and makes me want to play more. I could play more, I could also go back and see how changing my decisions would impact on the world and I look forward to doing that when developers Studio V and publishers VLG Publishing bring the game to the PC later this year. Dry Drowning is scheduled to be released sometime in August.