Raging Loop certainly isn’t the first video game to use the social subterfuge of Werewolf and The Resistance as its backbone (Ubisoft released one such game for PlayStation VR only a few short years ago). However, I hadn’t ever seen the use of Werewolf in a visual novel prior to a copy of Raging Loop show up in my inbox. Known most famously for their retro Top Gear titles and the glut of Japanese RPG’s you’ll often see on mobile marketplaces, KEMCO hasn’t had many opportunities to prove themselves as a visual novel publisher in the West. With Raging Loop, both developer KEMCO and publisher Pqube want to prove that werewolves shouldn’t be something to fear.

For this particular rendition of Werewolf, it’s important to note its relevance to the lore surrounding Yazumizu Village. The act of sacrifice and death are of great importance to the religions of this small farming village. In order to appease the gods that keep their modest village from ruin, whenever mists roll into town, the residents must endure what is known as The Feast of the Yomi-Purge.

This so-called feast sees each resident brought together into a daily tribunal to discover the source of the previous night’s events. In each night of the feast in Raging Loop, one random village is murdered within their own home and in the morning that follows, those left alive hold council to talk amongst themselves to discover the possible murderer who is then sentenced to death by hanging. To further complicate matters and create a broader connection to the game of Werewolf, half of Yasumizu’s residents are given guardian spirits that are drawn upon their bodies in blood while they sleep. Those given guardian spirits are gifted with roles within the larger feast and can impact the game in various ways, just like the counterparts in the actual Werewolf game.

While half of the players are but normal humans, the others hold powers that can influence the game greatly if exposed during the nightly feast, doubly so if used for subterfuge and lies. Two players are given the role of monkey whose only power is to know who the other one is (thus eliminating possible suspects of the wolf), a snake who can use their divination power once per night to learn if a specific player is a wolf or human, a crow that can divine if the person hung the night prior was a wolf, and a spider that can protect any one person from being attacked that night by wolves. The number of wolves vary depending on participants but all games begin with at least two. These nighttime hunters are given the right to enter out into the misty nights and murder one person of their choosing, unless they’re protected by the spider’s ability (wolves have the mystical ability to unlock one locked door per evening).

If faced with the ultimatum of death, the human mind has the uncanny ability to discard humanity for the sake of self-preservation. Every night of the feast, a sacrifice must be made in order to appease the gods that watch over the village of Yasumizu. Those taking part in the feast each night are forced to vote upon a member of their own ranks to sacrifice for the sake of rooting out the wolves hiding in their ranks, a task that remains the only way to remove one of the multiple wolves hiding among the villagers.

During these debates, every player tries to justify their own role while rooting out those who might be the foes killing them off one another during the middle of the night. It’s during these mental gymnastics that Raging Loop’s English translation really shines as each character tries to keep themselves alive. Some of the justification for how the team decides on who to hang can be an exercise in desperation and where the personality of each of the Yasumizu villagers comes out. If it means being able to live one more night or keep the others from discovering that a specific character is a wolf, many of the cast will lie in order to preserve their own life, although other characters are honest to a fault. It's up to the player to discern between the two and learn about the truth of what the feast really is and how everything is connected in one big Raging Loop.

Despite being an outside source that’s only just visiting the village, Haruaki Fusaishi’s presence is a gamechanger for the feast. Just by being present in the game, the assignments and number of the various roles are changed and it is by his choices that the game changes. Raging Loop is a visual novel with little interaction from the player, save for various inflection points that require a crucial choice. Make the wrong choice and it often leads to one of many bad endings for the main character.

As with all great mysteries, the series of ‘Dunnit’s are what are needed to wrap up a story and leave the reader with satisfaction and far more answers than questions when the story reaches its climax. The whydunnit and howdunnit can be just as important as the whodunnit when it comes time to wrap things up neatly. In the case of Raging Loop, these matters are slowly revealed across the course of multiple loops. As one loop ends, another begins and more secrets of the Feast of the Yomi-Purge are brought out into the light. By the time I finished Raging Loop, I was still left with so many questions about the howdunnit that even another playthrough in Revelation Mode still couldn’t answer.

Upon clearing the final True route of Raging Loop, diligent players are rewarded with a number of added bonuses. If you’re into vocal dramas, there are a number of short skits in Raging Loop’s media player, although these weren’t for me. I was more interested in five brief story vignettes that explore the aftermath of the events in Yasumizu Village through different characters. These lean more into the supernatural elements surrounding Raging Loop and left me curious if this was but a singular story in some wider-reaching story universe that amphibian and KEMCO are working towards.

In a lot of ways, KEMCO’s Raging Loop can be seen as an introduction to the visual novel genre. Raging Loop offers a route map that shows characters just where they are in the story, something that’s become common in Uchikoshi-helmed stories and other dynamically shifting visual novels. Not only can you jump to any previous story segment that you’ve read before but this also keeps track of choices made, allowing players to rewind time and make a different decision that may adjust their fate just long enough to avoid that particular cruel fate. Because of how straightforward the choices and map can be, there’s little mystery to just how best to proceed. My only complaint is how much Raging Loop held my hand to ensure that I was constantly moving on the right path (doubly so for hint popups that appear during every bad ending that give explicit tips on how to navigate around that particular roadblock).

I’ll admit, I was a bit skeptical of how a social mystery game like Werewolf could be transformed into a visual novel. However, my expectations were met nicely and Raging Loop was one of those visual novels that I simply couldn’t put down. From one loop to the next, I was enraptured with the mysteries that slowly unraveled throughout Raging Loop. While more of a guided experience than the likes of Virtue’s Last Reward or AI: The Somnium Files, KEMCO has surprised me with a psychological thriller that easily ranks up there among Uchikoshi’s best. 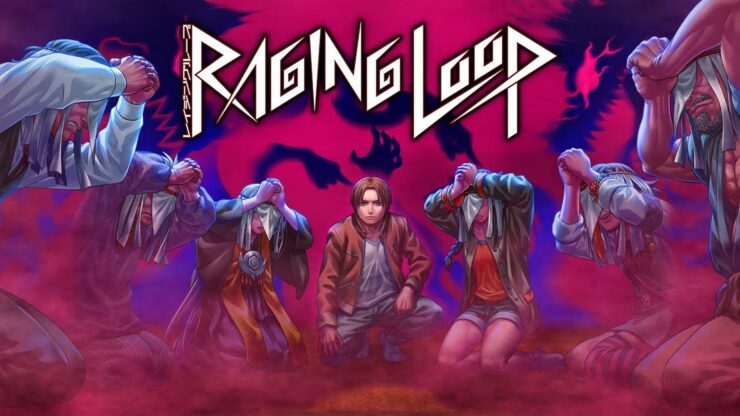 A psychological thriller from beginning to end, Raging Loop takes the deduction out of the players hands and leads them on a visual novel that ranks among Uchikoshi's notable works