Saurik had already essentially fixed the setreuid kernel patch issue with Cydia 1.1.19 update making it run as "mobile" always instead of "root". If you had any troubles jailbreaking iOS 8 - iOS 8.4 using earlier TaiG versions, try the very latest and bug free TaiG 2.3 jailbreak tool. You can download TaiG 2.3.0 TaiGJBreak_EN_2300.zip for Windows from here. Once downloaded, follow our step by step guide to jailbreak iOS 8.4 on iPhone, iPad or iPod touch on Windows or Mac OS X. 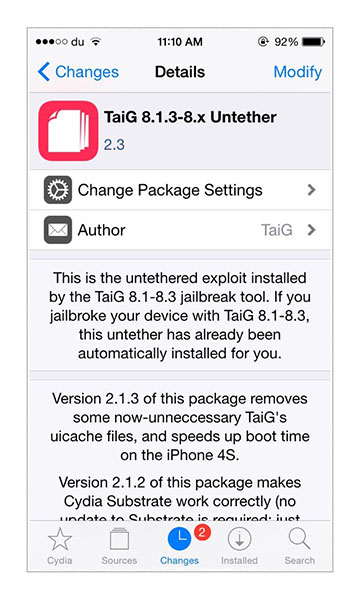 For those of you, who already have TaiG 2.2.0 or 2.2.1, can install the latest update as an untether package to get rid of the setreuid kernel patch. No need to download TaiG 2.3 or re-jailbreak your iPhone, iPad or iPod touch! To update, you don't even need to have any new repositories or sources as the TaiG 2.3.0 update is available on the default Telesphoreo repo.

Cydia Updated To 1.1.20, Puts An End To App Crashing And Bug Fixes

How to Change Mouse Cursor Color on Windows 11

How to Create a Mobile Hotspot on Windows 11 Computers