Cydia Updated To 1.1.20, Puts An End To App Crashing And Bug Fixes

Cydia has been providing a boatload of tweaks for your jailbreaked iOS device and recently there were some bugs and issues discovered. Recently, a new version 1.1.20 of Cydia just got released. The release is an upgrade to the 1.1.19 version which was out two days ago. The 1.1.19 version of Cydia brought a major change, which had support for running the substrate tweaks in Cydia Installer. The Saurik released Cydia 1.1.19 update runs more of a mobile than allowing root developers to enhance Cydia through jailbreak tweaks and themes.

The 1.1.20 version is a sequenced update to tackle the bugs and issues that had the tendency to crash Cydia. It also has support to ignore updates that do not function adequately, the incorrect values shown in storage info and half installed stage for packages. The update will fix many bugs and issues that hooked along with the previous major update as well as improved functionality.

All of these changes are welcomed to Cydia, however there is another feature added that allows users to backup their repositories or sources list to iTunes. This states that all of your sources and repos for installing tweaks will have a backup in your iTunes account. Henceforth, restoring your device after jailbreak would put your sources back in Cydia again. The change log for Cydia update 1.1.20 is as follows: 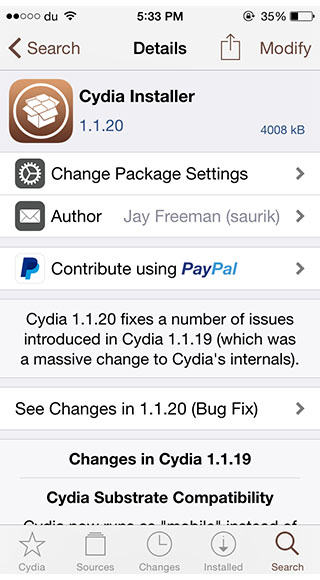 If you went to “Sources”, tapped “All Sources” (or an individual source), tapped “Edit”, and toggled section hiding on or off, Cydia could crash. (This feature lets you hide specific categories of packages from showing up in “Changes” if you aren’t interested in them.) Cydia should no longer crash when you do that.

Ignore Upgrades Didn’t Do Anything

If you had gone to “Change Package Settings” at the top of a package page for an installed package, and then chose “Ignore Upgrades” (which means “do not include this package when selecting Upgrade All”), that feature wasn’t doing anything. It should now work again.

Ordinarily when a package installation fails for some reason, it can be left in a “half-installed” state, and Cydia offers to fix this state for you — but this wasn’t working. Now if you get a half-installed package and accept the option to fix it, it should get fixed.

If you went to the Cydia homepage, tapped “Storage Information”, and tapped “Storage” to learn how much room you have for new packages, Cydia reported strange numbers. Cydia should report reasonable numbers now.

When we wrote the changelog for Cydia 1.1.19, we forgot to mention that as of Cydia 1.1.19, your sources list is now included in your iTunes backup. This means that if you add a few sources, backup your jailbroken device, restore, and both put your backup onto your device and jailbreak again, Cydia will conveniently have your list of sources including the ones you added.

So update your Cydia to the latest version 1.1.20 and get hold of all the changes made in the update. As for now, this is it for the update, if you want acquaintances over compatible jailbreak tweaks, get a list from here. If you have any queries regarding the update, notify us in the comments below.