iOS 9.0.1 update for iPhone 6s and iPhone 6s Plus is now available to download. We have the direct links to the update right here.

With only a few hours to go, the iPhone 6s and iPhone 6s Plus will start hitting the doorsteps of users who pre-ordered the handsets. But already, Apple has released the first ever point update for the device, which is the same as the one which was pushed out to everyone else just yesterday - iOS 9.0.1. The new update fixes a lot of bugs which plagued users last week when iOS 9 was released to everyone around the globe. In case you missed our previous coverage, the new iOS 9.0.1 update brings with it the following changes: 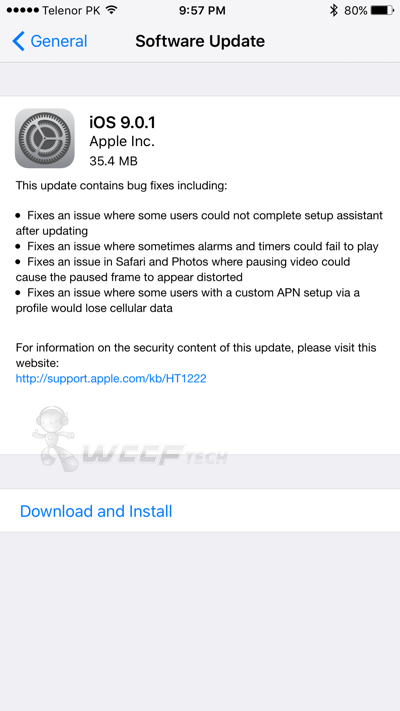 As you can see from the above screenshot, iOS 9.0.1 is meant to fix a lot of bugs and make the overall iOS 9 experience as smooth as possible for users. But for those who are in the ownership of an iPhone 6 Plus, don't expect the update to make your device buttery smooth just yet. We're certain Apple is working on the fix for it and will be out soon.

The iPhone 6s and iPhone 6s Plus are the big flagships to come out of the Cupertino camp and are packed to the rafters with technology not available in any other device, such as the 3D Touch display, which can sense three levels of pressure - a touch, press and a hard press. Apart from that, Apple has also bumped up the RAM to 2GB, ensuring a smoother experience for users.

In the camera department, Apple has beefed up the rear sensor to 12-megapixels, while the front facing offering now snaps selfies in 5-megapixel resolution. But adding extra megapixels is not the end of the story, as Apple is also bringing in a new Live Photos feature to the roster, giving extra life to your photos. Also, Apple has added 4K video recording to its devices, further enhancing the video recording credentials of its smartphone lineup.

Once you get your hand on the iPhone 6s and iPhone 6s Plus, we highly advise that you update to iOS 9.0.1 straight away. Simply launch the Settings app, tap on General, then Software Update. The update will pop up straight away. Tap on 'Download and Install' and you're good to go.

For your convenience, we've also added the direct download links to the firmware files as well, which you can grab from below.