One of the most popular tower defense games for mobile platform, Plants vs Zombies received its second version few days ago in different parts of world. Today, it seems, the gaming app sequel is available worldwide for Android and you can download Plants Vs Zombies 2 for Android on your devices!

Electronics Arts' Plants Vs. Zombies 2 was already pushed to iTunes App Store for Apple's iPhones, iPad and iPod Touch earlier in July this year. Although Android has been gaining popularity with some godspeed, devs and publishers still tend to favor Apple over Google's Android. Albeit, many major developers have started a simultaneous release strategy, Plants Vs. Zombies 2 was evidently not one of those. 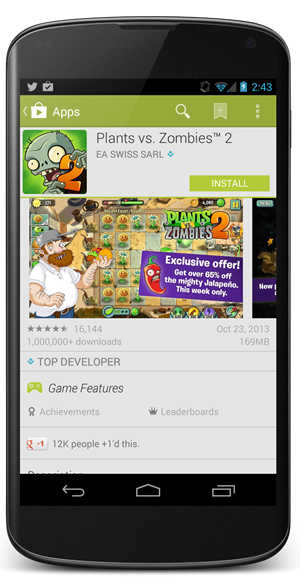 The best thing about this second installment of EA's Plants Vs. Zombies has to be some refinement and added originality. Plot is definitely still the same, but much more refined aesthetics make it even harder to put this already addictive game down. As we have previously witnessed mobile game sequels mostly getting only a bit of tweaks after the first major releases, Plants Vs Zombies 2 for Android is for sure carrying some originality.

You can download Plants Vs. Zombies 2 for Android from this link. Enjoy the new game, invest / waste some good hours and yes, please to not forget to give us some feedback about this sequel.

Relevant read: EA announces the release dates of Titanfall and The Sims 4

Plants vs Zombies Fans Should “Be Ready for Monday,” Says PopCap