Update - It looks like links that redirect to HIS Digital's listing page are down since the leak. A few moments before the links were taken down, HIS revealed yet another card - 280X iPower IceQ X ².

A few moments ago, we detailed the possible codenames of AMD's upcoming Volcanic Islands family of graphic cards which are going to be released in October 2013. It was only a matter of time before more credible details came along and looks like manufacturer HIS Digital has confirmed the AMD R-200 series.

AMD R-200 Series codenamed 'Volcanic Islands' is a mix of refreshed Southern Islands cards and a new Hawaii GPU based on the new architecture. It won't be a surprise if AMD dropped a new GPU name on the refreshed cards like they did to their mobile Solar Series GPUs codenamed 'Venus'. Nevertheless, the codenames seem to be accurate and the AMD R-200 series would replace the Radeon HD 7000 series graphic cards after a wait of two years. The 'R' denotes Radeon, '2' denoted the family, and the other two digits would denote the graphics positioning which in the case of Hawaii based GPU would be AMD R-290/R-280 and successor to the Pitcairn cards would be denoted by the AMD R-270 branding. HIS Digital lists a total of 7 branding six GPU tiers which are listed below:

There would be two products positioning in the AMD Radeon R-200 lineup, the R9-200 series would make use of the Hawaii, Tahiti, Pitcairn GPU while the R7-200 series would feature the Cape Verde and Bonaire GPUs which are entry level models. The complete lineup would look something like the following but don’t hold your bets on this since this chart is based off preliminary information from GPU-z: 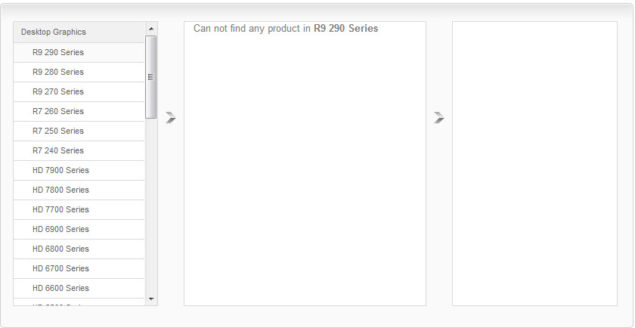 The names are yet to be confirmed but it seems so as if the bulk of the mainstream cards would be based on older or revised versions of current Southern Islands chips. This would mean more cheaper Tahiti’s and Pitcairn’s could be on the road from AMD while the main flagship Hawaii would remain as the only new part competing against NVIDIA’s GK110 core. Only time would tell whether the Hawaii can erupt the greatness of NVIDIA’s Titan and GeForce GTX 780 GPUs and can their refreshed cards hold up against NVIDIA’s own refreshed GeForce 700 series cards in value.