Death is going to be the new protagonist of Darksiders 2, the brother of War will not see his blood be victim to false accusations and he is going to go to go against angels, demons and the undead too to prove his brothers innocence. Death is well known in many games hence he is going to be a remarkable protagonist for the game since fans will be able to use the infamous Reaper Scythe in a variety of ways to deal with enemies the way THEY want to in the pursuit of justice. 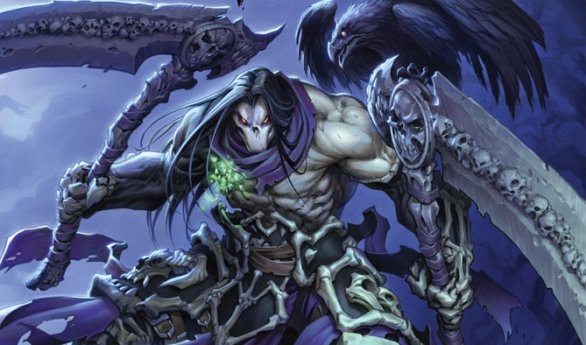 In the newest trailer of Darksiders 2 we see the potential Death will have as the protagonist in Darksiders, we see that he will travel to a city of angels, a city of demons and even into the city of the undead rather than Earth which will allow for more exploration than the previous game offered. The trailer also shows us that the infamous Reaper Scythe can be used in a variety of ways such as be broken into two to make dual wield or be kept in the normal style preferred by the reaper but Scyrhes aren't going to be only weapon available in the infamous horsemen's arsenal 😉 .

The trailer goes on to show us the personalities of War and Death and while people did like the way War presented himself I am definitely looking forward to the darker personality which Death will carry out in the game since he is more aggressive and more dominant than War this can really play out well during intermission sequences and boss fights where Death will definitely show off his powers as the famed horseman of the apocalypse.

The game is coming to PS3, XBOX 360 and PC in the Summer of 2012 so be sure to get a copy of this game on launch especially if you loved the original game, If you loved the War waged out in Darksiders you will definitely "die" for Darksiders 2 😉