Dark matter is a hypothetical substance and it is estimated that it comprises 27% of the mass and energy that is observed in the universe. It may be matter but it doesn’t seem to react with electromagnetic radiation. Scientists have been working tirelessly to detect this matter but to no avail. After a 20 month run, the LUX (Large Underground Xenon) experiment failed to detect the dark matter particles.

According to Rick Gaitskell, physics professor at Brown University and co-person for the LUX project, “LUX has delivered the world’s best search sensitivity since its first run in 2013. With this final result from the 2014-2016 searches, the scientists of the LUX Collaboration have pushed the sensitivity of the instrument to a final performance level that is 4 times better than the original project goals. It would have been marvelous if the improved sensitivity had also delivered a clear dark matter signal. However, what we have observed is consistent with background alone.”

The world's most sensitive detector: LUX

The LUX detector is a specialized detector. It is extremely sensitive and is able to detect WIMPs (weakly interacting massive particles) during interactions between dark matter and normal matter. LUX consists of approximately one-third of a ton of cooled liquid xenon, enclosed in a titanium shell. This shell is surrounded by powerful sensors that are designed for the detection of any photons or electrical charges that are emitted if a WIMP collides with a xenon atom. A 72,000 gallon tank of high purity water and a mile of rock protects this entire feature from cosmic rays. This entire set up is located in Lead, South Dakota.

It was anticipated that this detector would be amazing, but it turned out to be even better. This is probably owed to the fact that the entire team worked very hard to filter of all errors and detections due to imposter particle interactions. Unfortunately for them, however, the team was only able to observe these imposter interactions and none of the dark matter interactions they were looking for. 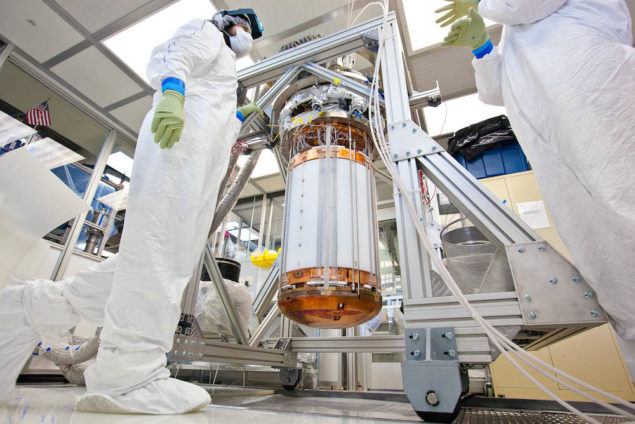 In a statement regarding the experiment, the LUX collaboration reassured that despite the fact that they couldn’t detect the dark matter, the WIMP model ‘remains alive and viable’. They also pointed out that such constraints do not invalidate the data found in any way and all information collected is still important even if it isn’t related to dark matter.

Is there more hope for the detection of Dark Matter?

The LUX may have been unsuccessful in detecting dark matter but researchers haven’t lost hope. They are hoping that CERN of the successor of LUX, the LUX-ZEPLIN (LZ) may be successful in providing them with sufficient data. The LZ is approximately 70 times more sensitive that the LUX and instead of a third of a ton of the liquid, it now contains a 10 ton liquid xenon.

Harry Nelson of UCSB and a spokesperson for the project said, “The innovations of the LUX experiment form the foundation for the LZ experiment. We expect LZ to achieve 70 times the sensitivity of LUX. The LZ program continues to pass its milestones, aided by the terrific support of the Sanford Lab, the DOE, and its many collaborating institutions and scientists. LZ should be online in 2020.”