With the stabilization of iOS 8.4 jailbreak, a lot of compatible tweaks are making their way to Cydia with full support. In the last few days we covered Springtomize 3 and Activator version 1.9.4 packages that deals in integrating with many other tweaks. However, Activator still remains in the beta version which will be up for release soon. 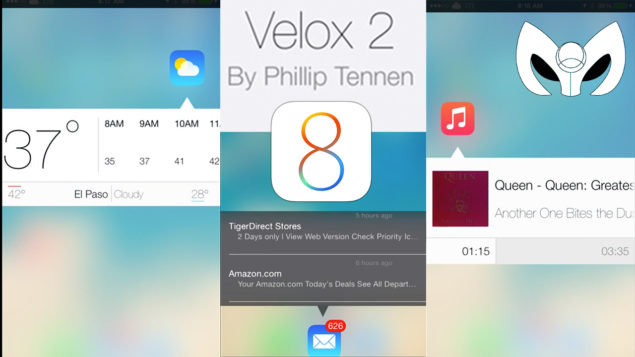 Velox 2 has recently made its way to Cydia for iOS 8 to iOS 8.4. The tweak allows you to interact with different application right from the home screen, without any need to open the app itself. There are a lot of other features that this tweak covers apart from the standard interaction. Lets roll down to look the Velox 2 tweak in a bit of detail.

Velox 2 Enables You To Interact Without Opening The App

The way this tweak is quite elegant, simply swipe up on any app icon and a tray would appear that would behold options regarding that app. So no need to open the app, just interact from the Home screen. for instance, if you swipe up on a Clock app, a list of options would appear on the specialized tray to turn the alarm on or off. However, if there is a non supporting application, the tray would only show notifications for that app.

Other than this, the tweak also showcases a preferences panel that allows you to customize the tray, and gesture based control to provoke Velox and shifts from dark to light mode or vice versa. Velox 2 has some great tools to accomplish tasks right on the Home screen, saving time for users. The swipe up gesture is a pretty cool way to interact with apps. A wide range of information is displayed, judging by the application you are considering.

Another feature that not all tweaks has is Velox's ability to enhance functionality from third party developers. Developers can be creative and search their own ways to improve Home screen functionality. Velox's extensions can be put on Cydia for download using the tweaks API. You can install the tweak from Cydia's BigBoss repository for just $1.99. So do give this tweak a whim and share your thoughts in the comments.