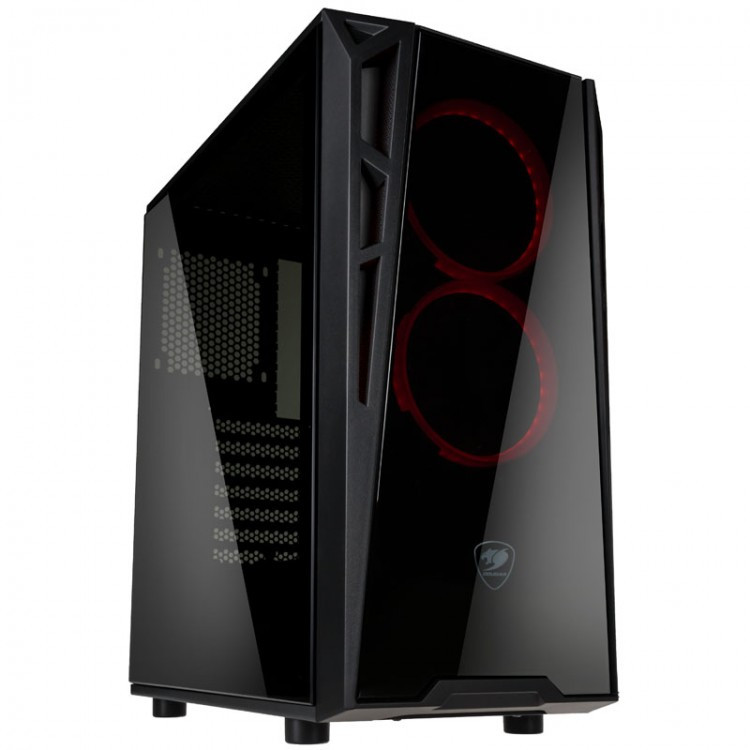 Cougar a well known European brand for cases, peripherals, and cooling has announced its latest case, the Cougar Turret, a compact mid-tower with two tempered glass panels, one on the side for showing off the internals of your personally built system. The second panel is on the front of the case which can be used to show off the lighting effects with the two pre-installed Vortex LED fans.

featuring a dual chamber design that is all the rage today to separate the power supply and HDDs from the rest of the system, which is mainly used to keep the cable management tidy for those who take aesthetics very seriously, it is also thought to keep the noise level down from hard drives. This varies in success from PC case to PC case.

The Cougar Turret can handle motherboards from full ATX to M-ITX as well as three 350mm GPUs which is roughly over 13 and a half inches long, so pretty much every GPU ever made. The case also has enough space to store two 3.5" drives like most dual chambered cases, or a maximum of four 2.5" drives and comes an I/O that contains 2 x USB 3.0 ports, 1 x USB 2.0 and mic/audio support as standard.

Cougar has said they have made cooling a priority. They have developed a "gaming vent system", which is an air inlet slightly offset from the case's front panel. This they say ensures effective airflow to components within the case and is covered with a solid plastic mesh that protects the inlet from dust. In theory, this should be more effective, though I would have to test to see if this actually helps over a similar sized gap the whole way down rather than just this angled design.

Finally, the Turret comes with two Vortex LED fans (No RGB here) and support for 4 additional fans. Alternatively, if you prefer water cooling, the Cougar Turret supports up to three radiators including a 360mm front mounted radiator, a 240mm top mount and finally a 120mm rear mount.

As for pricing, it is available for pre-order now for £66.95 in Europe, I have contacted Cougar for their pricing worldwide and its availability.