With the gaming industry ushering in a new era of Virtual Reality, PC gaming is clearly leading the way by exclusively sporting two of the three biggest VR headsets that exist today, along with headsets like Sulon Q, which straps a whole PC to the back of your head and brings together “virtual reality, augmented reality, and spatial computing” all in one place. This fact would generally make you believe that PC gamers are more interested in virtual reality than their console brethren. However, a recent study suggests the opposite. 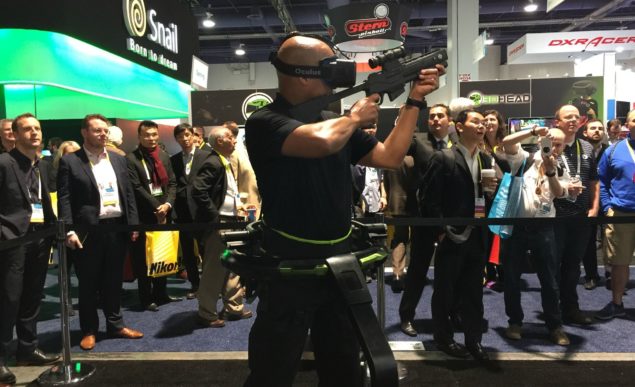 According to a survey run by market research firm Ipsos for GamesIndustry.biz, a good chunk of gamers don't seem to be excited about putting on a virtual reality headset, and despite having more accessibility to VR, PC gamers are just aren’t as excited in exploring new worlds as you would expect. After analyzing the data collected from over 8,000 gamers across Europe, the research firm found that around 63 percent of console gamers are looking forward to virtual reality, a number that stands over the 51 percent of PC gamers who show interest for it.

Investigate more specifically and you will find that the amount of PlayStation 4 and Xbox One gamers – who, of course, are more related to the VR industry than last-gen console players – interested in virtual reality is even higher, with 72 percent of the total who contributed in the survey showing interest for the technology. But if you take an overall look at the feedback from all the 8317 respondents coming from all gaming platforms, more than half of them show no interest in virtual reality, with only 49 percent excited about it.

The site pointed out that those who participated in the survey were clearly asked to ignore the cost they will have to bear for VR, so this means the higher interest among console gamers isn’t necessarily due to the lower cost of VR technology on their platform, take PlayStation VR as an example, which costs $399 only in comparison to the $599 Oculus Rift and the $799 HTC Vive. The survey put forward a rather detailed question, mainly focusing on the immersive entertainment that virtual reality has to offer. Here’s what was asked, followed by the detailed chart that shows the complete feedback.

“New ‘virtual reality’ technology will soon be available, allowing you to experience more immersive entertainment at home. Wearing a special headset linked to devices such as computers or games consoles, you will be able to move around within virtual three dimensional environments and see and hear as if you were actually there. This could include playing video games, as well as interacting with other content (such as films or simulated environments). Assuming the price was acceptable to you, how interested would you be in having this type of ‘virtual reality’ technology at home?” 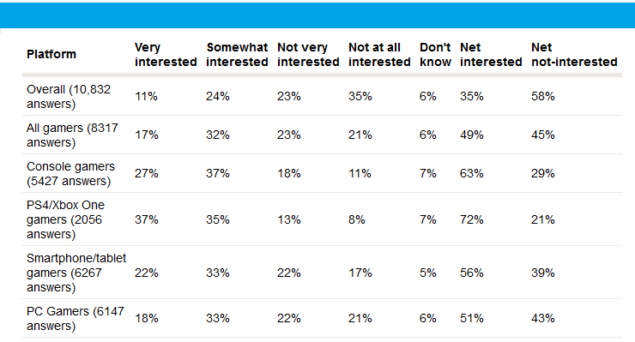 Nevertheless, this study doesn’t necessarily mean companies like Oculus or HTC have something to worry about. Though it is still interesting to see that while most of the virtual reality stuff that is going on in the industry has PC at its core, and console gamers only have PlayStation VR to cheer about, with no word on a VR device from Microsoft so far, it is still the console gamers that seem more excited about this revolutionary technology. Oculus Rift, which is coming out later this month, might change things here, as PC gamers will have more time to experiment with VR than console gamers who will see the release of PlayStation VR later this year in October.