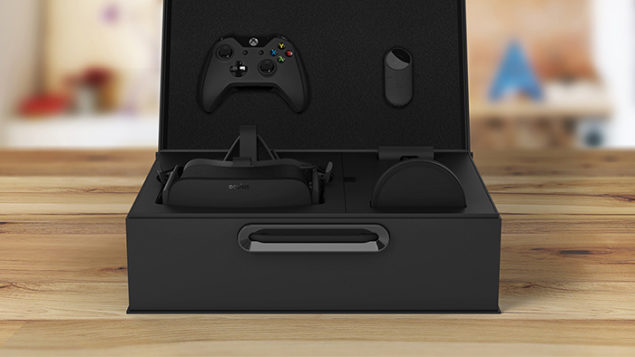 After years of waiting, Oculus Rift is now available to pre-order. The VR sensation will come with a microphone, sensor, headset, Oculus remote and Xbox One controller bundled in a rather stylish box. You'll be the talk of the town, if only because you'll need to sell your family to get one.

Americans can expect to throw down $599 for the set, while buyers in the UK will be paying £499 and Europeans will be set back €700.

The headset will be available in March, with select retailers stocking a limited selection of the set from April. Expect more details as time draws nearer.

We’re excited to announce that Rift is now available to pre-order for $599 USD on Oculus.com and it will ship to 20 countries starting March 28. People have been dreaming about immersive high-end VR for decades, and we’re thrilled to share Rift with you this March.

Rift will also be available in limited locations at select retailers starting in April.

Pre-order and you'll get access to two made-for-VR titles, including EVE: Valkyrie and Lucky's Tale.

To use Oculus Rift, your PC will need the following recommended specs or better:

As of writing, the estimated shipping date is May 2016 - a few months later than it was when pre-ordering opened. Presumably this will continue to slip as pre-orders build, so if you're desperate for one this side of Christmas, you should put your money down sooner rather than later.

For more information, or to pre-order, visit the official Oculus page. Our own Keith made a video asking if the price is too much, what's your opinion on the matter? Vote in the poll and leave a comment below!