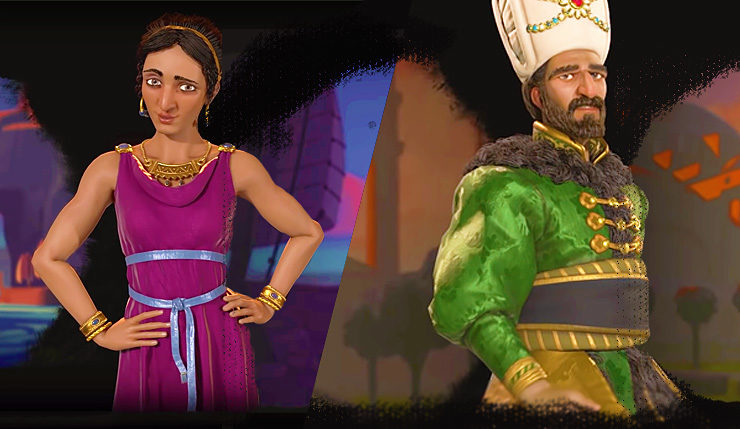 Civilization VI recently announced its second full expansion, Gathering Storm, which focuses on the environment and diplomacy, and since we last updated you Firaxis has revealed two more civs – Phoenicia led by Dido and the Ottomans led by Suleiman. The Phoenicians, an ancient Semitic people who lived in modern-day Lebanon, have never appeared in a numbered Civ game before. You can check out a video overview of Phoenicia, below.

Phoenicia was a nation of sailors and traders, so, appropriately, they get a variety of economic and seafaring bonuses. Here’s a complete rundown of what Phoenicia brings to Civilization VI:

Unlocks Writing technology Eureka at the start of the game. Coastal cities founded by Phoenicia on the same continent as its capital are 100% loyal. Settlers have additional movement and sight range while embarked, and ignore additional movement costs associated with embarking and disembarking.

Naval district that replaces the Harbor and is cheaper to build. Must be on Coast or Lake Terrain adjacent to land. Increases Production toward naval units and Settlers in the city. All naval units in this city’s borders heal completely in one turn.

Ancient era naval unit that replaces the Galley. Has increased combat strength and movement, and friendly Trader units are immune to being plundered if on a water tile and within four tiles of a Bireme.

The Ottomans, one of the most powerful empires in history and predecessor to modern-day Turkey, are Civilization staples, appearing in every game since Civ III. You can check out a video overview of the Ottomans, below.

Given the Ottomans commanded one of the largest and longest-lasting empires of all time, it isn’t exactly surprising that they’re mainly a military-focused Civ. If crushing cities is your thing, the Ottomans are for you. Here’s a complete rundown of what they bring to Civilization VI:

This ability unlocks Ibrahim, a new Governor available only to Suleiman. Ibrahim has his own unique promotion tree and is the only Governor you can establish in another civilization.

Replaces the Musketman unit and is stronger and cheaper to build, but consumes a Population point in the city in which it is trained - unless it is a conquered city. The Janissary also starts with a free Promotion.

Replaces the Bank in the Commercial Hub. Adds additional Amenities and Strategic Resources available in the city.

This naval raider unit replaces the Privateer and is available earlier in the game. Coastal raids do not incur movement cost.

Not only are siege units much faster to produce, but they also receive boosts to Combat Strength. In addition, conquered cities do not lose population, and they benefit from Amenity and Loyalty bonuses while under Ottoman control.

A couple solid additions to the Civilization VI lineup. I’m not really that into sailing or naval warfare in Civ games, so I’m not sure the Phoenicians are for me, but the Ottomans look like a good choice for those times I’m feeling a little more aggresive. Firaxis has also announced Hungary, the Maori, Canada, the Inca, Mali, and Sweden will be part of the Gathering Storm expansion.