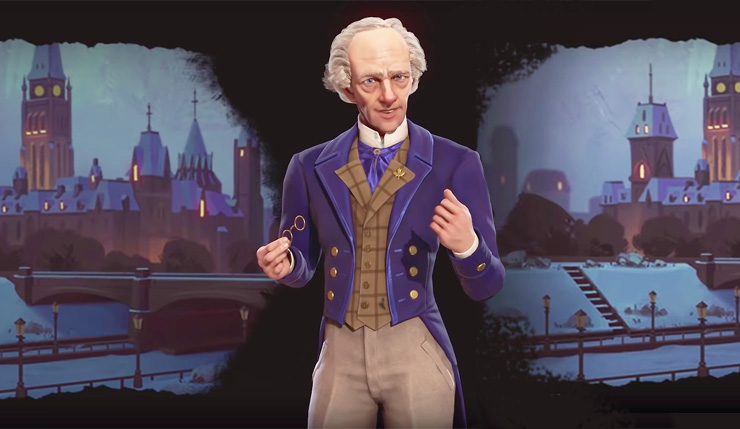 For years Canadian Civ fans have been begging for an opportunity to take over the world, and it seems the upcoming Civilization VI: Gathering Storm expansion will finally make it happen. The Cree, an indigenous nation largely based in northwestern Canada, were part of Civ VI’s Rise and Fall expansion, but now the whole country will be represented under respected Prime Minister Wilfrid Laurier (he’s the guy on our $5 bills). You can check out a video overview of Canada, below.

It appears Canadian Civ will include all the usual stereotypes – our unique unit is, of course, the Mountie and our unique building is the Hockey Rink. Also, the “Four Faces of Peace” ability, which prevents Canada from declaring surprise wars, or having any surprise wars declared on us, is pretty much perfect. We’re lovers, not fighters. Well, maybe we’re not lovers eithers. We’re watching Netflix under blanketers. Here’s a complete rundown of what Canada brings to the table:

Ice Hockey Rinks grant additional Appeal and Amenity, and bonus Culture for each adjacent Snow, Snow Hills, Tundra, and Tundra Hills tile. Once the Flight technology is unlocked, grants Tourism from Culture; after unlocking the Professional Sports Civic, awards additional Production and Food; and, if built adjacent to a Stadium building, grants even more Culture. Only one Ice Hockey Rink allowed within a city’s borders.

Perhaps unsurprisingly, Canada seems to cater directly to my Civ play style, as I usually try to avoid war, get along with everybody, and quietly pump up my culture. I’m such a stereotype. Firaxis has also announced Hungary and the Maori will be part of the Gathering Storm expansion.