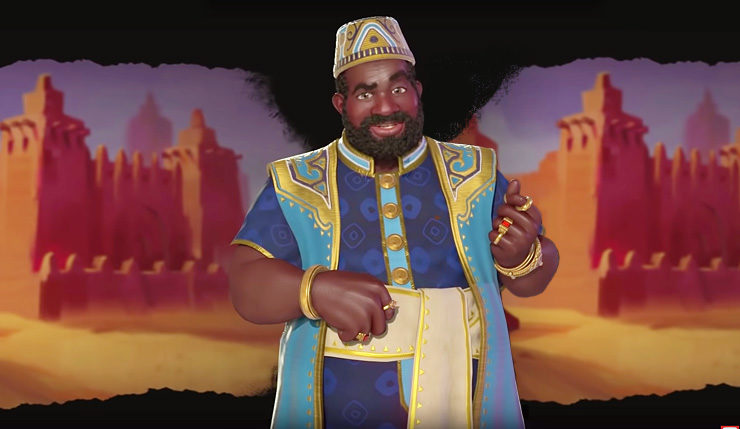 Civilization VI recently announced its second full expansion, Gathering Storm, which focuses on the environment and diplomacy, and now they’ve revealed another new civilization – Mali led by Mansa Musa. Mali and Mansa Musa have been recent series mainstays, appearing in every game since Civilization IV. You can check out a video overview of Mali, below.

Leader of Mali from 1280 to 1337, Mansa Musa is believed to have been one of the richest men of all time. Mali looks to be a relatively balanced civ, well-suited for those looking for a Faith of Cultural victory. As you would expect, Mali also gets bonuses for building on desert tiles. Here’s a complete rundown of what Mali brings to Civilization VI:

This replacement for the Commercial Hub allows Mali to purchase Units, Buildings, and Districts at a reduced cost, with either Gold or Faith. Also provides additional Gold for adjacent Holy Sites, tiles containing a River edge, and bonus Gold for every two adjacent District tiles.

Unique Ability – Songs Of The Jeli

This Medieval-era unit replaces the Knight and prevents Mali Trader units from being plundered, as long as they are on a land tile within four tiles of a Mandekalu Cavalry unit. Combat victories provide Gold equal to the unit’s base Combat Strength.

Mali isn’t as unique as some of the other Gathering Storm civs, but it looks like a good choice for those who like to focus on accumulating a lot of that sweet, sweet Gold. Firaxis has also announced Hungary, the Maori, Canada, and the Inca will be part of the Gathering Storm expansion.