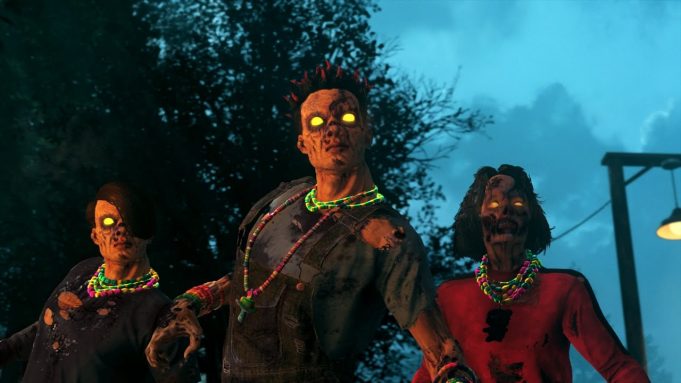 Sometimes during a zombie apocalypse, the only person you can count on is Silent Bob. Activision just released the trailer for Call of Duty: Infinite Warfare's latest zombie adventure, Rave in the Redwoods.

After surviving the events of Zombies in Spaceland, our zombie murdering protagonists find themselves in an abandoned campground for horror director's Willard Wyler's next slasher movie set in the 90s.

The team will face off against near endless amounts of raver zombies and a 'Slasher' who is stalking you throughout the map. Rave in the Redwoods includes brand-new weapons like a baseball bat covered in nails, a machete or a trusty ax. You know, the likely things you'd find at a campsite full of undead ravers so expect to find some mind-altering drugs in your adventure.

Most importantly, there is a cameo from the well-known indie director and giant comic book fan, Kevin Smith, whose helping you along the way to end the craziness going on in the campsite.

Call of Duty: Infinite Warfare's Rave in the Redwoods arrives first on PlayStation 4 on January 31st. Xbox One and PC users will see the content at a later date.

In our review of Call of Duty: Infinite Warfare, we praised the game's awesome single-player campaign over its rather lackluster multiplayer:

So in summation, is Infinite Warfare worth your money? It very well may be, but it’s tough to say. No doubt, this is one of the best Call of Duty campaigns in a long time, bundled with a multiplayer that’s perhaps too familiar, though just as sharp as it has ever been. If you’re a big fan of Zombies or want some space dog fighting, then Call of Duty: Infinite Warfare offers more than the last few releases in the series have. If you’re just looking for a fresh multiplayer experience, then you’ll likely find you’ve seen it all before with Black Ops III.