What an incredible year for first-person shooters. DOOM kicked off 2016 with style, and games like Shadow Warrior 2, Titanfall 2 and Battlefield 1 have continued a trend of shockingly great singleplayer campaigns. In the midst of this old school return to form, Call of Duty’s Infinity Ward, the studio that changed online multiplayer have brought us Infinite Warfare, a spacefaring sci-fi shooter that gets more things right than it does wrong.

In Infinite Warfare you play as the newly-promoted Commander Nick Reyes, who takes charge a space warship, the Retribution, which acts as a home base to rest at in between campaign missions. For the first time since the Modern Warfare trilogy, the campaign has a cast of characters that aren’t entirely forgettable – no longer the grizzled white dudes of every other shooter ever (aside from Reyes himself, who is beyond boring) the cast look and feel like individuals, with Reyes’ pal Salter, the British Omar and your robotic pal Ethan all becoming characters that you’ll fondly remember once the campaign has wrapped up.

The characters are so memorable partly because of how they’ve changed the flow of a Call of Duty campaign. The Retribution is partially explorable when being used as a home base, but more can be done here than simply mission selection. In the Captain’s Cabin Reyes can listen to audio logs or view briefings on the history of the characters manning the Retribution. Elsewhere on the ship you can see crew lounging in their free time, or even practicing gunfights in VR. In these areas TV reports play, recapping the events of recent missions, offering more insight into what the repercussions of your missions are.

Missions are selected from a map of our Solar System, Mass Effect-style, and even feature side quests in addition to your main missions, which can either be space dogfighting or more traditional COD campaign fare, with the usual corridor shooting gallery. Space dogfighting actually feels surprisingly great, with full movement of the ship being handed to the player, aside from select sections where your co-pilot will fly over ships while you shoot targets. Flying in space feels very good, almost like EVE Valkyrie, but these missions end up feeling a bit samey after the first two. On the subject of being in space, you also have the occasional mission that may want you to spacewalk, by floating about outside and grappling to debris to travel through the void. Honestly, these sections tended to be nauseating and frustrating – here’s hoping they don’t come back for the next one. 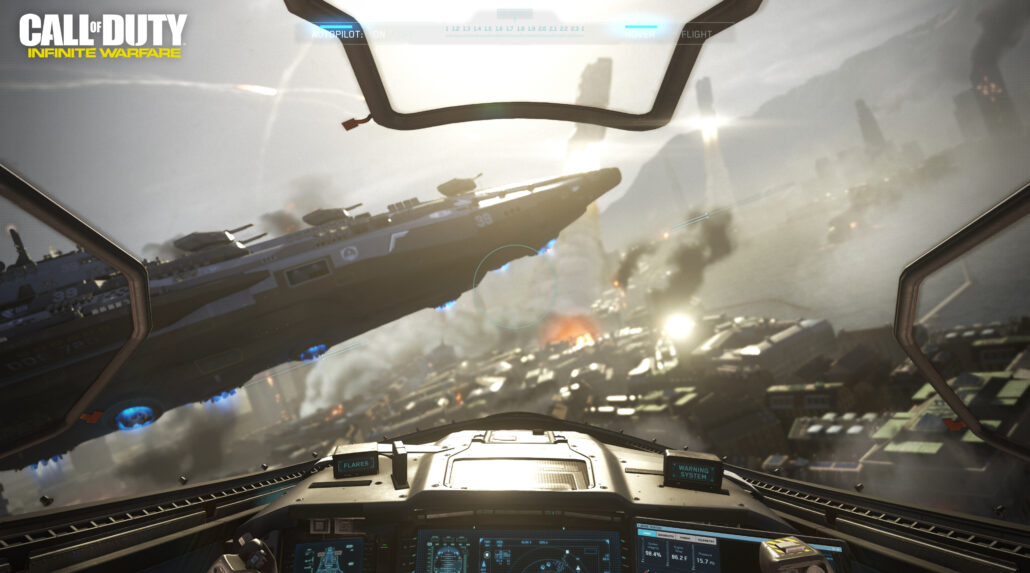 It's nice that the game offers chances to get to know your ship and crew, but it’s such a shame that Reyes himself is such a completely dull, predictable yes-man. He takes position of Captain of a warship suddenly, has responsibility thrust upon him, but just nods away – at no point does he have any real character flaws, and at no point does he seem to show any emotion. Even when the rhetoric and morals he holds himself to fall apart in the last few missions, he just accepts it, as if it never happened. No internal struggle, and still no show of emotion, Nick Reyes is exactly the kind of protagonist we need less of.

And going back to the rest of the cast – one must question if they’d be as memorable if they hadn’t been borderline force-fed to us. One thing I noticed in Infinite Warfare is that there’s far too much downtime with nothing but the characters nattering away. Minutes of the campaign will go by, and nothing but walking and talking with have taken place. One must question if the campaign’s pacing in these sections wasn’t so deliberately slow and tiresome, would the characters have been memorable at all?

Despite this, Infinite Warfare’s campaign actually feels like a return to form. This intimate character-driven story feels so much better than the typical bad-guys-have-nukes story of Call of Duty’s past. Not since Black Ops II have I actually remembered the plot and characters in such detail, and for that alone Infinite Warfare deserves a pat on the back.

On to the multiplayer, well, it’s very familiar. In fact, this is almost identical to Black Ops III’s multiplayer. Players can run, jump and wall run around maps with a variety of sci-fi themed weaponry, and the stages are as good as COD multiplayer have ever been. Seriously – the multiplayer almost feels like an entirely different beast, with beautiful, colorful maps and loads of variety, which is a stark contrast to the campaign’s gritty sci-fi aesthetic. The multiplayer is great, and highlight game modes such as Gun Game return for hours of fun.

And then there’s Zombies. I was once a huge fan of this game mode, but several years on and a million different wave-based horde games later, it feels very old hat. Still sticking to its guns, Zombies mode has Spaceland, an 80s theme park players must survive in. The story gimmick is “acting” this time, with each of the playable characters here for some sort of audition, while spouting lines about needing another take or making sure to get the big part. It feels old hat, and the layout of Spaceland doesn’t feel as good as Zombies maps of the past.

So in summation, is Infinite Warfare worth your money? It very well may be, but it’s tough to say. No doubt, this is one of the best Call of Duty campaigns in a long time, bundled with a multiplayer that’s perhaps too familiar, though just as sharp as it has ever been. If you’re a big fan of Zombies or want some space dog fighting, then Call of Duty: Infinite Warfare offers more than the last few releases in the series have. If you’re just looking for a fresh multiplayer experience, then you’ll likely find you’ve seen it all before with Black Ops III.

Reviewed on PC (code purchased). Also available on PlayStation 4 and Xbox One.

One of the best campaigns of the series, and one hell of a solid multiplayer. Call of Duty Infinite Warfare could be the boldest entry we’ve ever seen, though fans of Black Ops III might find Multiplayer and Zombies modes to be too familiar and frankly old-hat.