The year is getting closer to its end and the season for big video game releases is almost already here, which means there is not much time left before Call of Duty: Advanced Warfare, the next big title in Activision’s renowned Call of Duty franchise, lands on shelves for PC, and both last and next-gen consoles. Being developed by Sledgehammer Games, the game boasts advanced next-gen visuals and offers a vast multiplayer world that offers immersive game-changing gameplay experience. Below are some gameplay videos that leaked recently showing multiplayer assets of Call of Duty: Advanced Warfare. 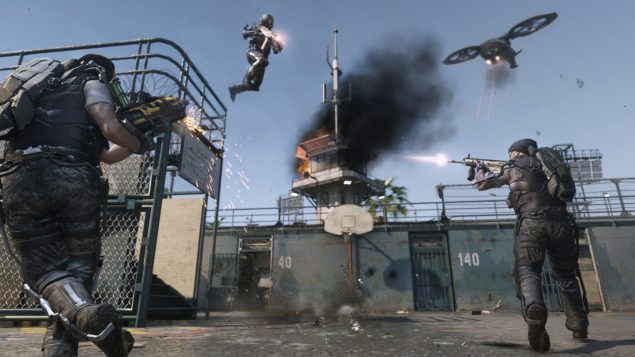 Envisioning the powerful futuristic battlegrounds, where both technology and apt tactics have evolved to play the key role in advanced armed conflict, Call of Duty: Advanced Warfare delivers not only an formative in-game story and gameplay, but it also spreads awareness, and weighs questions about the discreet transitions occurring in the world’s military practices. Set in the futuristic world of 2054 where Private Military Corporations (PMCs) control the dominant armed forces, the game follows the story of a U.S Marine who has become a part of Atlas Corporation, the world’s most powerful private military corporation that is responsible for tragic clandestine operations around the globe.

Multiplayer has its own separate seat of royalty in the Call of Duty franchise, as it is the main reason behind the prolonged life of many titles in the series. The multiplayer mode of Call of Duty: Advanced Warfare has been designed to ensure that the game’s appeal lasts longer than the previous titles in the series. Sledgehammer Games has introduced many “game-changing mechanics” in multiplayer mode of the upcoming game, for example, exoskeletons that offer enhanced in-game physical capabilities, and improved supple drops that reward players for their in-game achievements.

You can check out the offerings of Call of Duty: Advanced Warfare's multiplayer mode in the short video clips below.

Call of Duty: Advanced Warfare is being developed by Sledgehammer Games for PC, PlayStation 4 and Xbox One, while High Moon Studios is handling the development of the PlayStation 3 and Xbox 360 versions of the game, which will launch this year on November 4 on all platforms.