Call of Duty: Advanced Warfare is the next big thing in the veteran first-person shooter video game series known as Call of Duty. Set to release later this year on November 4, the game is primarily being developed by Sledgehammer Games for PC and the latest PlayStation 4 and Xbox One consoles, while High Moon Studios is working on PlayStation 3 and Xbox 360 editions. First revealed back in May, the developer has since rolled out many details about the game, however, the proper Call of Duty: Advanced Warfare multiplayer reveal happened just today, and you can view the 18 in-game minutes of multiplayer walkthrough right here. 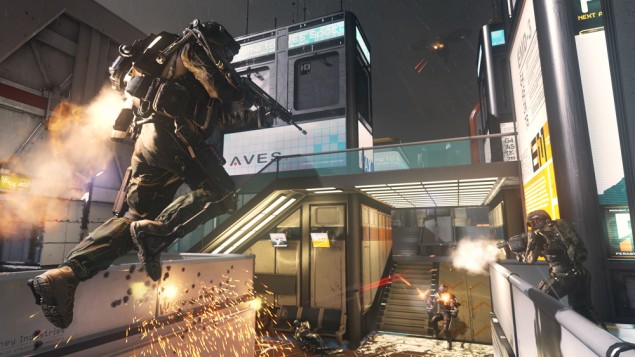 Today, Europe's biggest gaming convention known as Gamescom opened its doors to thousands of developers, publishers and video game enthusiasts worldwide. Welcoming everyone to its press event, Activision took the wraps off the highly anticipated Call of Duty: Advanced Warfare multiplayer gameplay mode, demonstrating new game changing mechanics that Sledgehammer Games has worked on during the three-year development cycle of the game, and that will explicitly characterize the game compared to the previous titles in the series.

Multiplayer is most often considered as Call of Duty's grand lure, as it is the only thing that keeps the titles in series alive for years even after players are done with the single player solo campaigns. Call of Duty: Advance Warfare multiplayer has been designed to ensure that players are provided with everything they need to take on their enemies equipped with futuristic weaponry. From advanced exo-suits to Pick 13 customization corner, the upcoming shooter is apparently almost everything that a next-gen Call of Duty title should be.

Some of the key "game-changing mechanics" that Sledgehammer has introduced into the Call of Duty: Advanced Warfare multiplayer are the exoskeletons, that allow players to enhance the physical abilities of their soldier, improved supply drops, that reward players for their in-game achievements and come in three flavors i.e Weapon Loot, Character Gear, and Reinforcements. This is not all, the upcoming shooter also introduces Pick 13 customization system that allows players to choose 13 perks, weapons, attachments and scorestreaks before jumping into a new match.