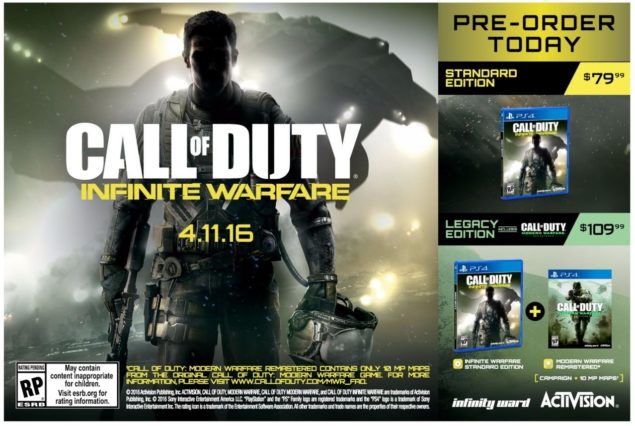 Yet another Call of Duty: Infinite Warfare leak just hit the Web. A high-resolution version of the cover has been leaked; according to the additional information contained in it, Call of Duty 4: Modern Warfare Remastered would include both the campaign and 10 multiplayer maps.

However, Call of Duty: Infinite Warfare would have two different editions. The basic one wouldn't come with Call of Duty 4: Modern Warfare Remastered, while the Legacy Edition would; prices would be $79.99 and $109.99 respectively, though these are rumored to be in Canadian dollars.

Keep in mind that this is still very much unconfirmed information, but the cover seems to be legit at a first glance. In any case, we'll post any update on this and all the other Call of Duty: Infinite Warfare leaks on Wccftech until the official announcement (which shouldn't be long now), so stay tuned.