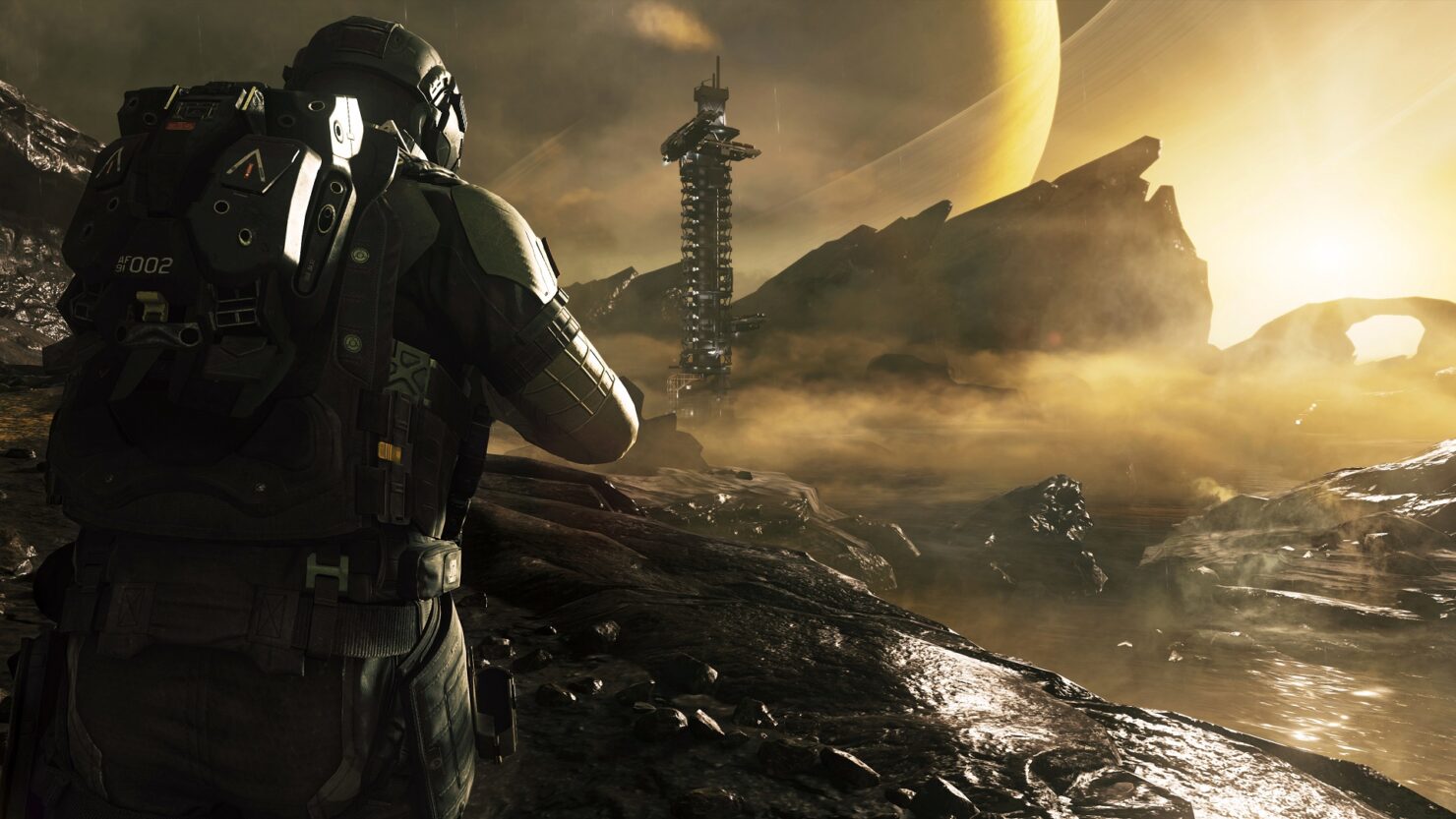 Call Of Duty Infinite Warfare, the latest entry in the series released last month on consoles and PC, has recently received a new update on all formats bringing a variety of general and platform-specific improvements.

Among the changes introduced by the latest Call of Duty Infinite Warfare update are balance changes for several weapons, fixes for several exploits and bugs and much more. Catch the full patch notes below

Fixed an issue to make sure the appropriate win/loss is given if the match ends before the forfeit timer finishes.
Fixed several map exploits on the following maps: Skydock, Precinct, Frost, Genesis, Crusher, Terminal, Retaliation, Mayday, Throwback, Scorch, Grounded, Frontier
Fixed an issue where Mission Team challenge progress would not display properly in round based modes.
Fix for Warfighter 'Ping' Trait Challenge.
Hardcore: Score popup is now shown in the HUD. Selected killstreaks are now shown in the HUD
Fixed issues with the Nuke killstreak in round based modes.
Fixed an issue where joining a match in progress and losing would end your win streak.
Fixed an issue with force spawning users without a loadout selected in Custom matches.
End of match combat now occurs in Uplink. Scoring is disabled once the match timer hits 0.
Various winner's circle updates and bug fixes.
Infected updates: XP Updates - Survivors can earn more score / XP on kills. All Infected players now earn assist point whenever a Survivor is killed. Slowed down the Infected move speed slightly. Infected now have a red electric effect to better distinguish them from normal Synaptics. More weapons will be added in a future update, we promise they are coming!
Fixed an issue to make sure the appropriate win/loss is given if the match ends before the forfeit timer finishes.
Notification for the "latest" calling cards from drops
Fix to Taunt menu selection and audio queues
Fix for Orion Initiative Mission Team Commander congratulations call out after ranking up
Fix for accessories not remaining equipped after leaving menu
Joining a game in-progress and then losing no longer ends your win streak
Adjusted overlap of text in Calling Card and Emblem menus
The "Good Citizen" Medal is now correctly awarded to the player who owned the package, not the one who picked it up
Fix for being awarded Scrap Assist points after dealing damage to a friendly Shock Sentry
Fix for one of the Synaptic Taunts not appearing correctly
Adjustment to the Banshee ammo counter animation
Added ricochet to the Epic Oni prototype, Kaiken
Fixed a bug where an error would occur after calling in a UAV
Fixed a bug when holding a weapon and gesturing
Fix for players being given Missions for Rigs that are not currently unlocked
Fixed a bug where the Banshee – Siren wasn't having an impact on other players after being damaged
Fix for the HUD Uplink satellite drone icon not showing which team controls the drone while in splitscreen
Fixed a timing bug where a turret would linger on a dead target before proceeding to target another enemy
Fixed an issue where a player would get the wrong mission in a match
Fixed a freeze issue when attempting to access the Store
Fixed a bug where splitscreen users were unable to change their team or role in custom games
Fix for a bug on Frontier where shadows would flicker in the hallway in splitscreen
Adjusted the killcam when a player is killed by a Bio Spike on Frontier
Vulture scorestreak adjustments: Turret damage increased. Turret fires faster. Min time between bursts decreased. Vulture movement adjusted to be more awesome.
Added function to allow the user to rotate a weapon in the Loadout select menu
Fixed a bug that would kick a player to the Main Menu when using the Steel Dragon Payload
Fixed a bug for secondary controllers for users in splitscreen
Fixed crash that would occur after map restarts
Fix for users seeing repeat Rig videos
Removed "Connecting to Matchmaking Service" text in Loadout menu after searching for a Public Match
Fixed an issue in splitscreen where both users would be kicked from the Loadout Menu if scrolling through it at the same time
Fixed a bug where users were able to temporarily gain access to locked Loadout slots
Fixed a bug in splitscreen where a user who enters Prestige would see red on the screen and would cause the player to lose Create A Class functionality, revealing placeholder icons
P-Law can now 1 shot UAV and CUAV
Fixed an issue where the UI wasn't displaying a few tiers for some of the Outfitter challenges
Adjusted the death camera from penetrating into corpses on the map
Fixed a bug on Genesis where the Vulture could get stuck inside of buildings
Fixed a bug where bots would hover around the position of a dropped flag by the opposing team in CTF
Fix for various overlapping texts in some menus
Fixed a bug to ensure the location map for deploying Bombardment and Scorcher streaks wouldn't be cut off when in splitscreen
Fix for the cook timer being visually offset in splitscreen
Fixed an error message and/or infinite loading screen after buying the Season Pass (only specific languages)
Fix for possible stat loss when signing into the same PSN account on multiple consoles
Fixed an issue the reticles on the DMR-1 Spectacle prototype are scoped causing the reticles to overlap the edges of sight in-game
Various lobby merging lobby fixes
Luitween error fix
Splitscreen players will now be awarded Keys and Mission Team Rank
Fixed a bug in the Quartermaster screen that would cause hitching after opening a drop
Moved Gender Voice Option to Rig Appearance Menu

Potential Luitween Error fix
Further work to ensure AFK players don't stay in the game and continue to matchmaking
The Headcutter damage exploit vs. Alien has been balanced
Adjustment to pause menu visuals during splitscreen

Fixed an issue where users with long usernames would overflow out of the boundaries of the match loading screen
Fixed a bug where a user could exceed the 10 point Loadout limit
Fixed a bug where special characters in a username would cause stuttering for other players
Fixed the keybind option for Taunts in Winner's Circle
Fix for a framerate hitch that causes audio issues when a player progresses from one level to the next in SP
Added mouse support to the lobby member slide feature
Fixed a bug when text and voice communications were set to "block," text communications were still displayed
Fixed a bug where the game stop responding if a player switched from windowed to full screen
Fixed a bug where multiple keybinds are getting unbound if a player uses the Copy Keys from mode to mode
Fixed an issue where PC buttons will briefly display the old help buttons when disabling a gamepad

Fix to 3rd person spectator showing zoomed in winner's circle
Add a sync intermission countdown with the host in CODCaster
Adjustments to team colors/logos in CODCaster
Fix for menus in CODCaster while in splitscreen
Removing ricochet tracers for energy weapons in CWL
Fixed a bug where changes to Team Settings in CODCaster would be reflected in the previous game's match summary
Added a "Follow Drone Camera" feature to CODCaster where the drone will be followed when thrown by the spectated player
Fixed a bug where the Objective Status in the Display Settings is set to "on," the screen would display red for allies and enemies
Payload rate changes: Disable Payload charge over time. Adjust Payload Score modifiers for each mode to balance Payload earn rates from score actions
Support for MLG.tv

Call of Duty Infinite Warfare is now available in all regions on PC and consoles. Still unsure about the game? Check out our review to see if the game may be worthy of your time.