A few Black Ops 3 cover images have been leaked detailing some features of the game. A “momentum-based chained-movement system” is described that will allow players to traverse the map in continuous motion using thrust jumps, slides, and mantling abilities, all while remaining in control of your weapon at all times.

Multiplayer maps are “built from the ground up” to promote both traditional movement and advanced maneuvers.

The new Specialist character system will give players the opportunity to “rank up and master each specific character’s battle-hardened capabilities and weapons,” promising three different progression paths, including the traditional XP and Weapon XP systems.

A campaign that can be played co-operatively with up to four players online is also available. The mode is “designed for co-op and replayability” with cinematic gameplay and open-area arena-style environments. Characters will also be completely customizable. Black Ops 3’s new Zombies will feature an “all-new narrative” with a full XP-based progression system.

“Actual platform availability and launch date(s) to be determined.

Black Ops 3 will presumably release on November 6 2015, and preordering the game will grant you access to the beta.

The new trailer for Call of Duty Black Ops 3 will be released on April 26 2015, which will share more details about the game and most likely some gameplay footage.

In the next 50 years, technological advancements will lead us into a world where only those who risk going too far, will find out how far we can actually go. 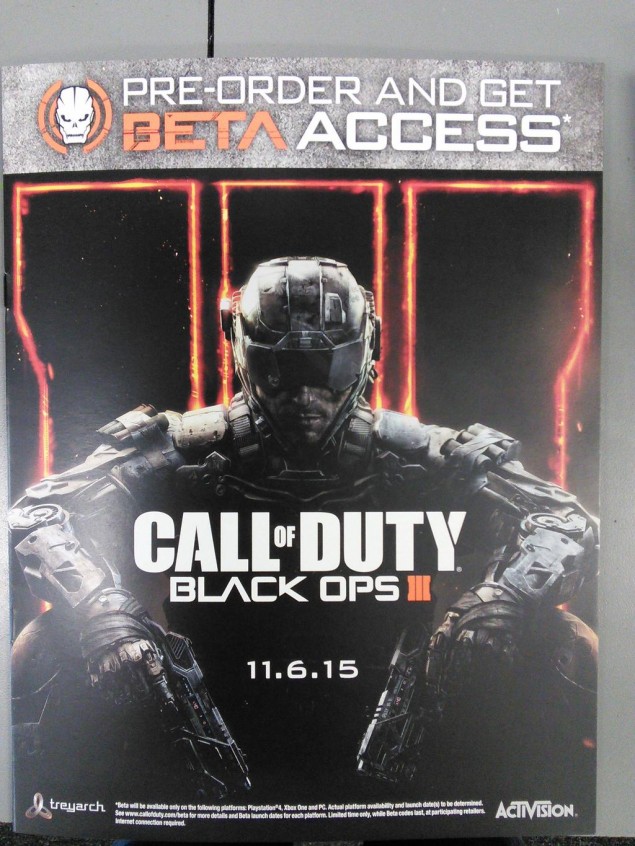 We will bring you any new information on Black Ops 3 as soon as it becomes available. The title is being developed by Treyarch for the PlayStation 4, Xbox One and PC and will release on November 6 2015. Be sure to check out our previous Black Ops 3 coverage for more information here and here.