Android Lollipop is Google’s biggest OS release and its update to many smartphones brings novelty in major visual and performance sectors. Lollipop introduced the new Material Design interface which is fluid yet visually appealing. Along with performance upgrades, it also features better battery life. The first device to get the Lollipop update was Google’s very own Nexus 6 which has proved out to be a great success. Next, Android One was given the initiative to run this plain operating system. As time passed by, there were numerous leaks and rumors that other smartphone manufacturers have also started to receive it like the Galaxy S5, Galaxy Note 3 and the Galaxy Note 4. 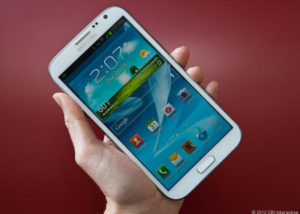 In December, Finland added a Galaxy Note 2 to the list of devices that will be upgradable to Lollipop update. Recently, Samsung Poland has confirmed in a tweet that Galaxy Note 2 will be updated to the latest version of Android OS. Galaxy Note 2 which will be three years old in September is moving closer to get the Lollipop update. It seems that Samsung is not forgetting the devices that it launched previously. There are still no reports of the final date to official release but it is assumed that Samsung is planning to launch the update in the upcoming months. 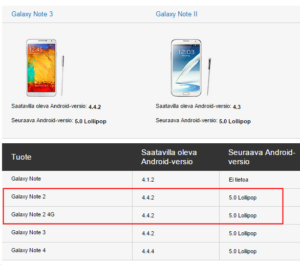 Samsung Finland on the other hand, still sticks to its notion that Galaxy Note 2 is up for update and indeed it is exposed to Lollipop 5.0. Right now, there are two major sources that confirm the update. Talking about the Note 2, its variants in the US has the same processor as the European models, the Exybos 4412 Quad processor. So the update to Lollipop can be expected to hit Note 2 in the US too. However, it depends upon the carrier to announce the exact date. Hitherto, Samsung Denmark has a slightly different view about the update release date. It says that the Galaxy Note 2 would start receiving the Lollipop update later in the year 2015, which means we have to play the waiting game, but it can’t be sure since there seems to be internal conflict within Samsung.

Hence, this is all we know about and we will keep you update as soon as the good news arrives. For now, share your views in the comments!