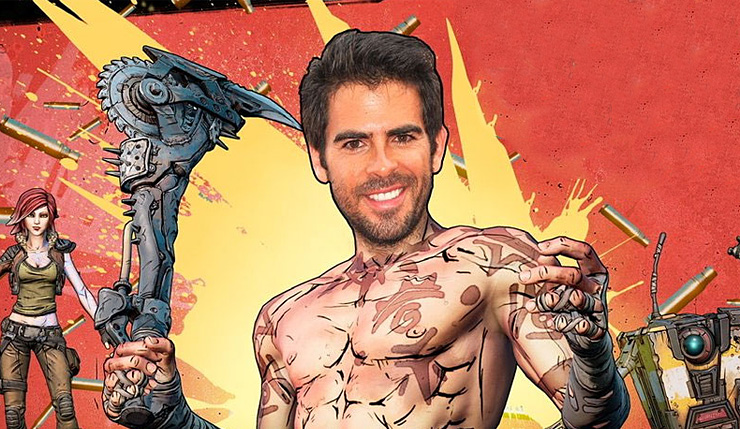 Update: The information below has been confirmed by The Hollywood Reporter. In addition to Eli Roth as director, the Borderlands movie boasts a script from Craig Mazin (the Hangover movies and Chernobyl TV series) and will be produced by Avi and Ari Arad (Spider-Man and X-Men movies).

It’s been known for a while that some form of Borderlands movie was in the works, and earlier this morning Randy Pitchford let the details slip – apparently, horror veteran Eli Roth will helming the flick. Pitchford quickly deleted the tweet for reasons unknown, but, of course, the Internet never forgets. Here's the screenshot receipt, courtesy of Kotaku.

I'm very excited to welcome Eli Roth as Director of the Borderlands movie in development with Lionsgate and Arad Productions. Please welcome Eli Roth to the team and be sure to catch the @GearboxOfficial Main Theater Show at #PAXEast on 2/27 to learn more.

I’m guessing Pitchford pulled the tweet because he realized too late that Roth’s involvement was supposed to remain a secret until PAX. So, uh, try to act surprised when it’s announced. I can’t say I’m a huge fan of Eli Roth’s movies, but his love of gore and bro-ish humor, and the fact that he was most culturally relevant around a decade ago, makes him a perfect fit for the Borderlands franchise. That may sound a bit snarky, but I really do think he could pull off a decent, tasteless Borderlands flick. It won’t be high art, but it could be some solid grindhouse-style fun.

As mentioned, Gearbox will be holding a big stage show at PAX East on February 27. In addition to an Eli Roth cameo, expect Borderlands 3 news, and likely some new publishing announcements.

Join us at #PaxEast for the Gearbox Main Theater Show on Thursday, February 27th at 2:30pm ET/11:30am PT!
Not attending PAX East? We'll also be streaming the event live so you don't miss a thing!

What do you think? Are you at all interested in a Borderlands movie? Or do you already get enough of the series’ trademark snark and flying body parts in the games themselves?