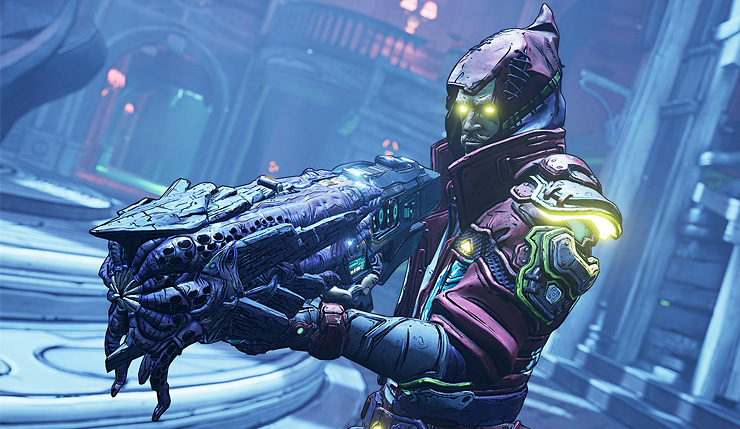 Looking for something to keep you busy during your coronavirus-imposed isolation? Well, you might want to pick Borderlands 3 back up, as the game is adding a whole bunch of new content over the next month. The game’s next chunk of paid DLC, Guns, Love, and Tentacles: The Marriage of Wainwright & Hammerlock, launches tomorrow (get the full rundown on the expansion here) and it will be accompanied by a level cap increase (you can now grind to level 57).

But that’s not all that's on the way! In April Borderlands 3 players can jump into a new limited-time event, “Revenge of the Cartels,” and a newly-revamped Mayhem 2.0 mode. If you’ve got a few minutes to spare, you can get details on all the upcoming content courtesy of the latest episode of The Borderlands Show.

Don't have time to watch a video? Here’s what you need to know about Mayhem 2.0 and Revenge of the Cartels:

Mayhem 2.0 turns Mayhem Mode into its own tab in your ECHO device, so you won’t have to visit the pedestal in Sanctuary III every time you want to adjust it. There are now 10 Mayhem levels to conquer, as well as over 25 Mayhem Modifiers that are classified by general difficulty for the ways they’ll make you adapt to new playstyles. Your chosen Mayhem level will also determine the kind of loot you get; for instance, a Mayhem 4 weapon will have better stats than the same weapon dropping at Mayhem 2, so the gear you earn in one Mayhem level will prepare you for the next.

Revenge of the Cartels

Revenge of the Cartels is new six-week seasonal event affecting the entire galaxy of Borderlands 3. Your kindly Saurian pal Maurice has gotten himself in trouble with a shady character named Joey Ultraviolet, and now Joey’s coming to collect on some debts. You need to help Maurice wipe his slate clean by taking care of different thugs hiding out across the solar system including areas added in campaign add-ons. Once you’ve eliminated these operatives, Maurice will use his handy portal device on Sanctuary III to whisk you away to The Mansion, a swanky new map where Joey Ultraviolet and his goons are hiding out.

Your encounters in The Mansion will change depending on which of three distinct gangs currently reigns over the Cartel. You won’t know what kind of enemies to expect until you’re in the thick of battle, beyond the fact that you’ll never fight the same faction twice in a row. Better yet, each gang has some unique loot drops and Anointed parts, so repeat runs are highly encouraged. An added suite of Cartel-themed Challenges will let you unlock Revenge of the Cartels gear, including some ‘80s-tastic Vault Hunter cosmetics. And of course, you’ll have the option to turn Revenge of the Cartels on or off as you choose for the duration of the event.

Borderlands 3 is available now on PC, Xbox One, and PS4. The Marriage of Wainwright & Hammerlock arrives tomorrow (March 26) and Revenge of the Cartels and Mayhem 2.0 launch sometime in April.