Back in April RIM unveiled that an update to the Blackberry Messenger was coming sometime soon. Since then millions held their breath, anticipating the new and improved Blackberry Messenger with high expectations. It was only a matter of time and now the wait is finally over. RIM has finally unleashed Blackberry Messenger 6 today. The new version brings some exciting features which everyone was desperate to witness. Tired switching applications? Well try the new BB Messenger which allows you to communicate while still inside the application. Want to know how? Take a look at the following press release by RIM which explains all the new thrilling features in detail. 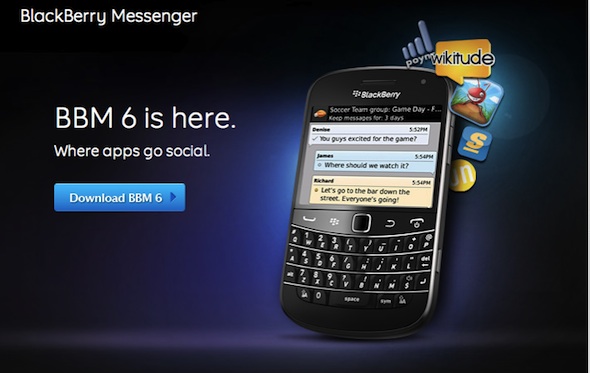 BBM connected apps integrate the popular functionality of the BBM service and offer users the ability to interact with their friends from within the app itself. For example, with a BBM connected game app, users can invite their BBM friends to join them in a game and then chat with one another in real time while the game is being played – without ever leaving the game app.

“BBM 6 marks the beginning of an even greater social experience for BlackBerry smartphone users,” said Alistair Mitchell, VP, BBM Platform & Integrated Services at Research In Motion. “It also represents an incredible opportunity for developers to leverage the viral nature of the BBM service and we have already begun working with various developer partners who will be bringing their BBM connected apps to BlackBerry App World this week, offering users highly engaging app experiences.”

Some of the additional functionality users can expect to see with BBM connected applications include the ability to:

• Share app experiences with friends - When a user discovers a great new BBM connected app, they can instantly let their friends know about it. Users can simply select a BBM contact directly within the BBM connected app they are using.

• Have a BBM chat within apps - Users can simply pull up their BBM contact list directly from within the BBM connected app and start chatting.  For example, the functionality can enable everything from enhanced social game play to collaboration through productivity apps.

• Discover apps through friends – Users can also discover new apps by viewing the list of apps that are posted to a BBM friend’s profile. They can also click on an app within the list, and instantly download it from BlackBerry App World.

The BBM 6 software will be available later today at www.blackberry.com/blackberrymessenger. A selection of BBM connected apps will also be posted on BlackBerry App World this week, with many more expected over the coming months.