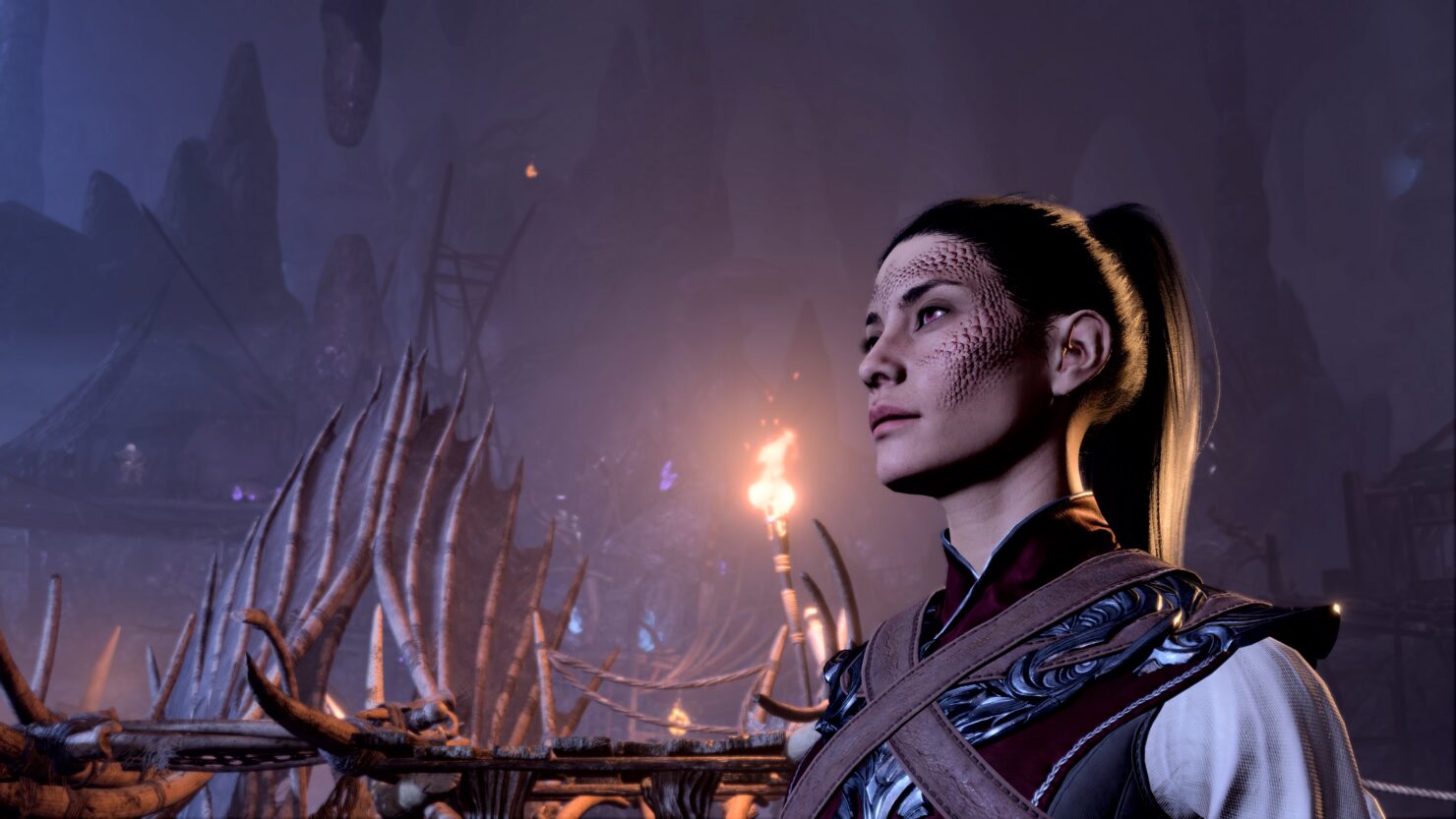 Baldur’s Gate 3 is nothing if not ambitious. Recreating the sprawling narratives and endless choices of a D&D campaign was tough enough in 1998 when the first Baldur’s Gate came out and the expectations of fans were far lower. Larian Studios have been steadily working on the early access build of the third installment since it launched last year; now, the upcoming Patch 6 looks to add more to one of the most challenging and thrilling locations in the D&D lore already included in the game: the Underdark.

If you’ve ever run a game of D&D, you’ll know the appeal of the Underdark, the vast network of tunnels and caves beneath the world filled with the strangest and most deadly creatures. But it’s more than just wet tunnels and dank caves. The Duergar, the Deep Gnomes, the Drow, and even the Mind Flayers have all made a home for themselves in the Underdark, transforming vast natural caves into fortresses, cities, and other colossal stone monuments. If any DM has tried creating a little patch of the Underdark for themselves, they’ll know how difficult it can be balancing the different biomes within the region. First, you have to contend with the layout of these twisted, ruined, or functioning walkways. Then you have to make sure the players aren’t accidentally going to collapse the whole cave on their head every time they cast a spell. Then you have to make the places they explore varied, interesting, and filled with characters that don’t immediately try and gut them. Then you have to give up and just have them fight a dragon on the surface or something.

Larian promised the Underdark, and they delivered. Players already got to explore this region or at least one face of it. You’ve seen all the classic glowing crystals, bioluminescent mushrooms, and other fantastic lighting sources to help guide in the sprawling caves of the Mushroom People. You’ve met the Deep Gnomes, and Duergar, and Mushroom people. You’ve seen the hints of old ruins down there too, but now you can see the real deal. Now the time has come to travel to Grymforge and see the ruined fortress, lava flows, and everything else you should expect from a lost underground castle. 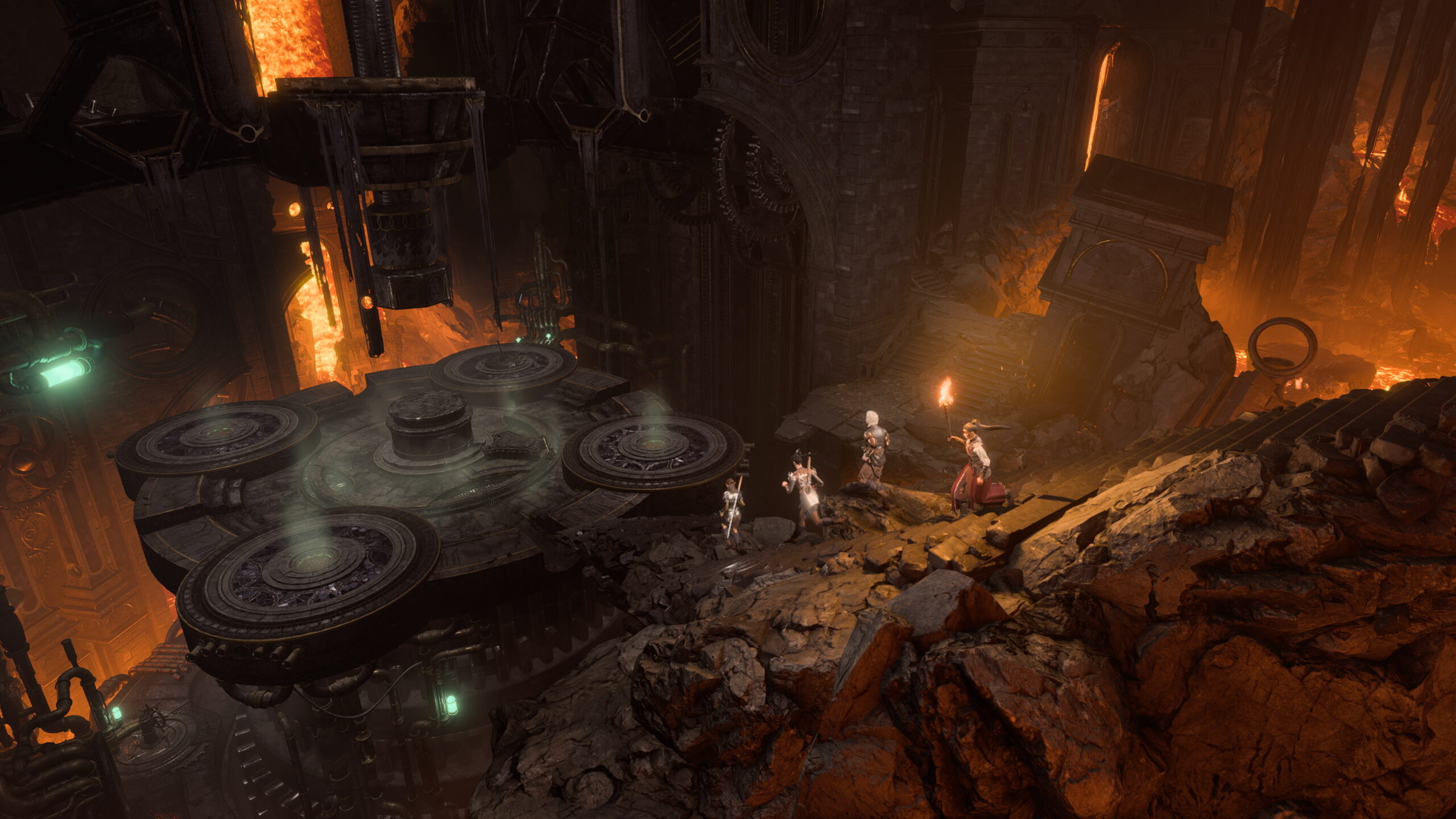 There is so much to do and see in the Grymforge it would be nearly impossible to list, and I probably missed a few things anyway. The area is huge and has so much verticality as you explore floor by floor this ancient rampart. Every direction has a quest, a character, or a location worth interacting with, and like the original region, it all fills so full of secrets and possibilities that is difficult to put down. And the fortress is occupied too. And there is always a mystery to be uncovered too. The castle has a past that can be unearthed if you can get the right dice rolls. Although it’s only been recently rediscovered, the Duergar are already here in force to claim the treasures the old stonework promises. Naturally, some will have violent inclinations towards the surface dwellers, but others offer the same intriguing dialogue and possibility you’ve come to expect from Baldur’s Gate. Each character you can speak to has a personality and desires beyond giving you a random quest or warning you of a nearby trap. Most also have an unusual perspective thanks to a lifetime under the earth that is delightful to interrogate. And there’s even a few incredibly special characters to meet, ones that feel like they might be quite important down the line.

Unfortunately, I didn’t get the chance to use the premade characters when I was spelunking in the Underdark, but I’m sure it’s even more interesting to hear what a certain cleric thinks of some of the idols you find along the way.

The other significant addition in the upcoming patch is a new class: the Sorcerer. Fans of Divinity might be surprised to learn that Sorcerers weren’t in the first edition of Baldur’s Gate 3 since the studio’s love for the term, but they are finally arriving for anyone willing to build a new character. 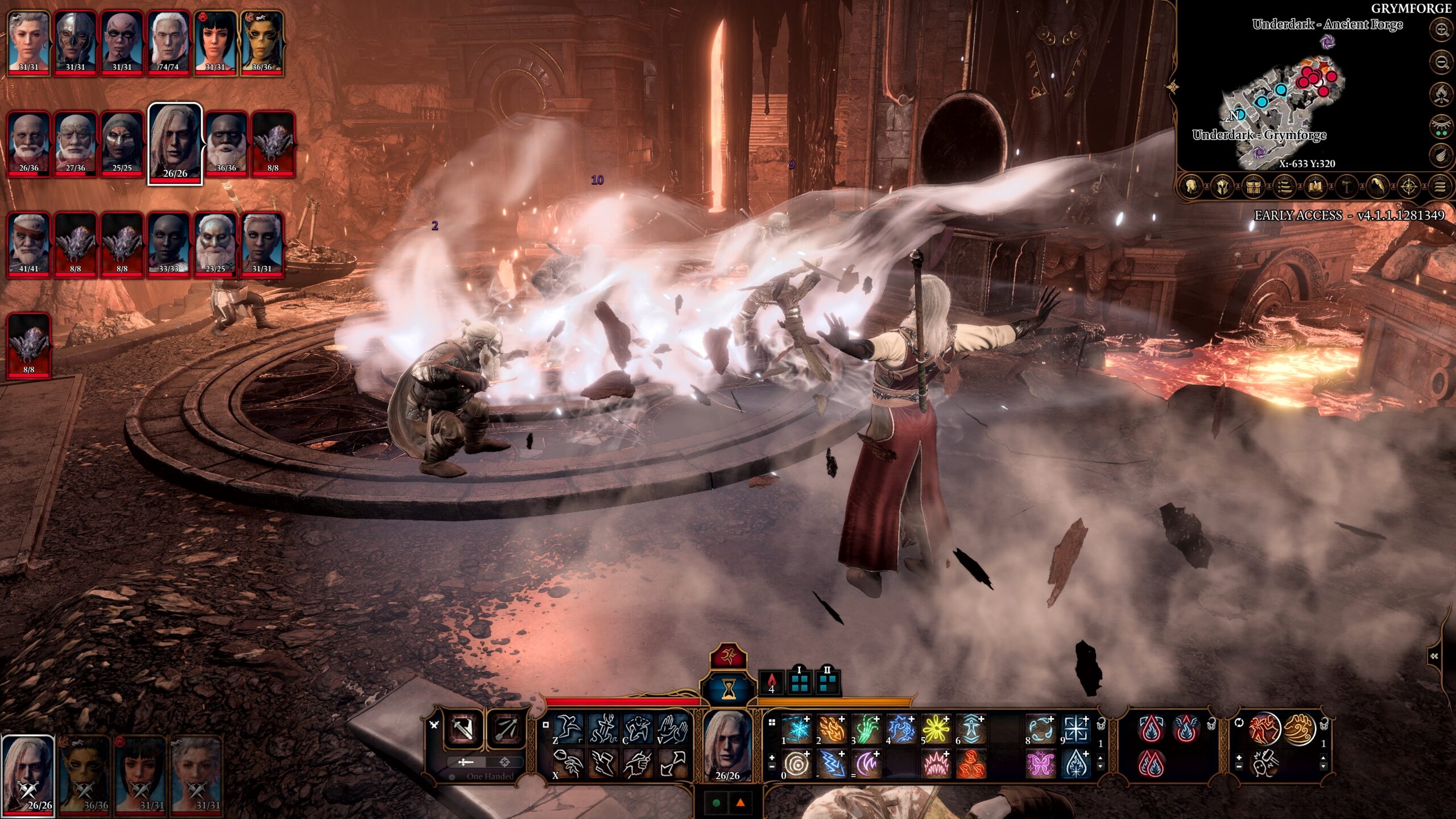 The Sorcerer in D&D is a caster who knows magic instinctively rather than learning it or having it gifted to them. This innate understanding and natural magic ability allow them to twist spells and make them more flexible than what appears in the Player’s handbook at the cost of their sorcery points.

Larian has done a fantastic job translating all the rules and accompanying exceptions into Baldur’s Gate 3. To be honest, it’s easier to understand than D&D itself. Like with other classes and spells, a few rules have had to be altered to make the game more streamlined and accommodating, but despite this, a Sorcerer still feels like a unique cast amongst a list of other casters.

Being able to change the range of your spell, for instance, is a fantastic tool when fighting in the varying caves of the Underdark, allowing players to take advantage of the situation and keep their Sorcerers out of trouble. Likewise, quickening the spell so you can still use your action point for something else adds a lot of versatility to the class that the likes of wizards make up for with sheer power. It’s hard to describe how it feels because Larian has already done a solid job balancing the game out. The Sorcerer is a full class to play, but it’s no more powerful or exciting than any other class you can pick. 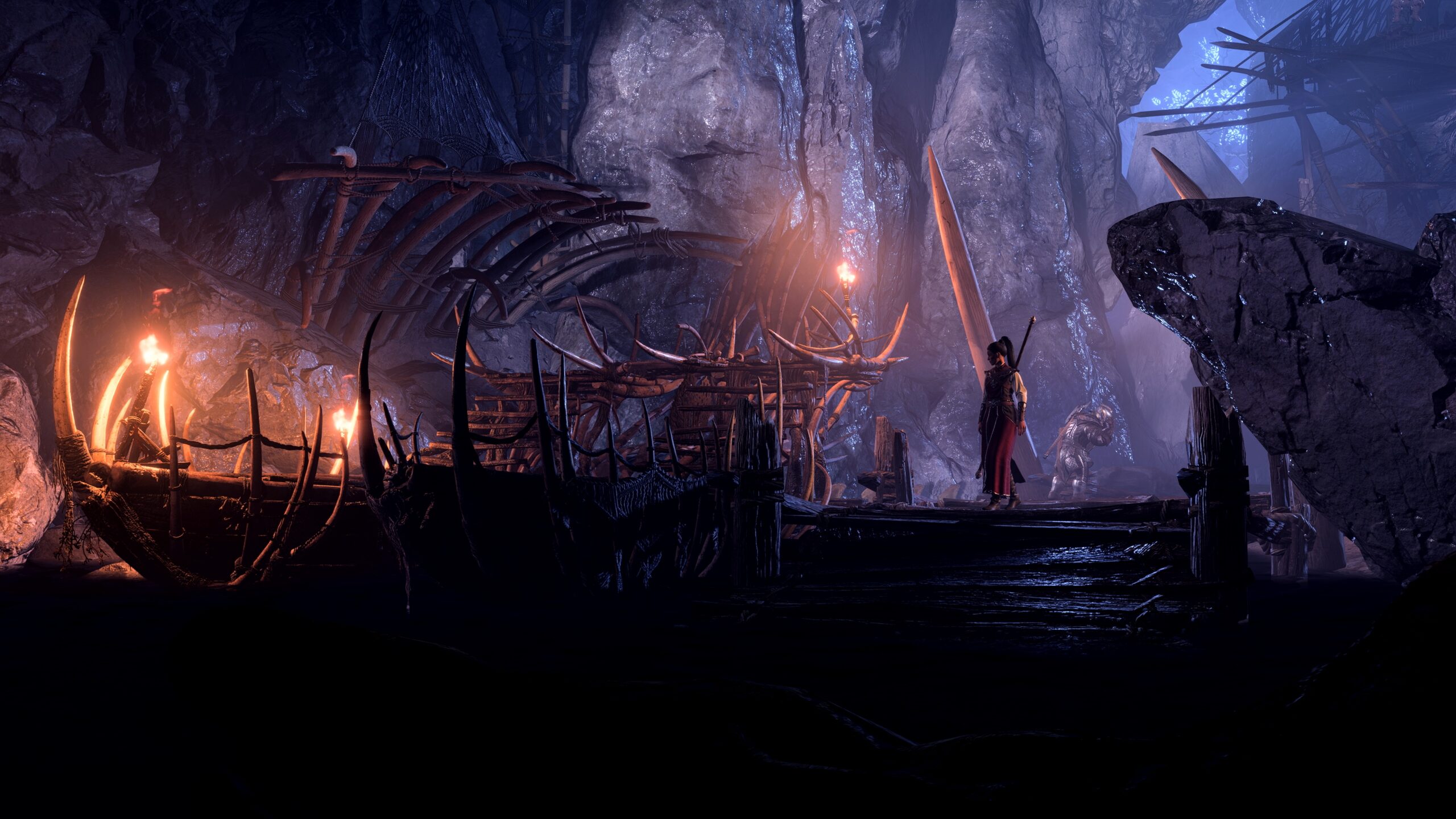 The developers have also made big improvements to the visuals with Patch 6, completely revamping the lighting system with volumetric fog and lighting, allowing all particles to be lit by environment and Global Illumination, adding brand new effects like translucency, atmospheric scattering, and dynamic clouds, introducing an entirely new colour grading alongside much-improved HDR rendering and tonemapper, and support for NVIDIA DLSS 2.3 and AMD FidelityFX Super Resolution. Last but not least, the characters will now realistically look dirty, sweaty, bloodied, and bruised as they go through their perilous adventures.

In short, there is so much to the new patch that people who have seen everything in the early access so far should nonetheless make sure to explore this new chapter in the development journey of Baldur’s Gate 3. People waiting on a completed game will still have a while to wait, though there’s already so much content to explore in Baldur’s Gate 3 that it might be worth picking the game up now. Just try to ignore the random bugs.