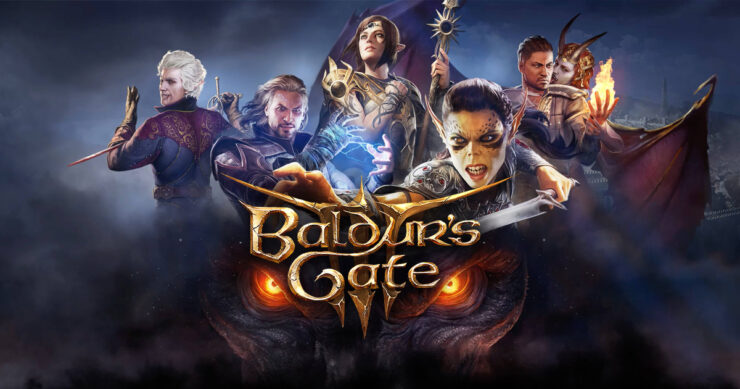 When you normally go into an early access title, you expect a few issues here and there. You also expect the game to be unfinished, either lacking content, whole game modes, polish, or anything in between. Baldur's Gate 3 is early access if you capitalised it, made it bold and cranked the sizing up to about one hundred.

When you think about Baldur's Gate 3, it's going to be impossible to not make comparisons to Larian's Divinity: Original Sin titles. However, you have the Baldur's Gate fans who naturally want the game to be more like the originals, plus the fans of Dungeons & Dragons, which want the games to be as close to the tabletop RPG's as humanly possible. I'm going to say that this manages it in a close way while making it a fun, very engaging, RPG.

Dice Rolls. That's what it's all about. Within a few hours of this game, you're going to look at a D20 dice as either the vessel of a non-corporeal entity that is plaguing your very existence or you'll start bowing to it, praising it as your new god. I'm leaning towards the former. I'm sure that most of the time, I'd struggle to beat the requirements if they were "1".

But this is something that really adds to Baldur's Gate 3. There's a true sense of it being the digital version of a tabletop RPG. You'll find yourself doing a lot of fighting, but as well as that, there's a hell of a lot of talking to do. Every single bit of this will put you at the whim of the gods of the d20. I'm already getting to the point where I'm thinking about creating a shrine to the damn thing in hopes that the game realises that I would very much like to beat rolls of 7, thus making me slightly more persuasive and welcome than a plague addled leper trying to get into a hugging contest.

So yes, unlike many RPG's, including those from Larian, it's not as simple as just having the right attribute level to pass a test. You want to have a good persuasion, or whichever attribute, level. This doesn't guarantee you'll be able to persuade a band of goblins to release a gnome they have trapped to a windmill though. You best roll the dice. The myriad of branching paths and conversation this system allows though, it's wonderful. It's also nerve-wracking, waiting to see the roll.

Want to know what is nerve-wracking? Getting into any sort of fight. Hell, even turning a corner and entering a conversation can be absolutely terrifying at times. This is a dangerous world. I've had magical mirrors slaughter my whole party in one fell swoop. I've walked in on a giant ogre having sex, which understandably annoyed her. Fortunately, I won that fight. I've also found myself in the lair of a giant teleporting spider which is one of the longest singular battles I ever remember having in a game.

Battling here in Baldur's Gate 3 certainly feels more tactical than similar RPG's. I would say this is because, for the most part, you feel underpowered. You have a lot of moves, items and abilities that can be efficiently used to keep you separated from a dangerous enemy. Sometimes it's as simple as throwing a bottle of grease in their path, causing them to slip over. Likely, you'll be trying to tactically push them off of cliffs, using doorways as a choke point or negative effects to hinder them as much as possible.

Fortunately, death is forgiving. A character gets reduced to zero HP, they aren't immediately killed, just knocked down. They will go through rolls of the dice, a death saving throw. If they get three fails, it's death. Three passes, they stabilise. Before the rolls complete can simply go over to them and help them up, a simple action. You'll also need to do this if they stabilise too. It adds a layer to the combat that can both be helpful and a hindrance. If you've got a lot of revival scrolls, a character not actually being dead can be a pain. However, if your healer is still alive, you can simply cast a healing spell on the knocked-down character to get them back up.

While this game is more grounded than most similar RPG's, there's still a fair amount of the magical here. The roster of spells is extensive, with more to come as seen by the list of magical scrolls I've found within the game. Even though there's a wide number of spells, you find yourself engaging more in the hitting, the smashing, the pushing, and the throwing. Still, there's nothing wrong with a good combination of these and the magical. I'm very much in favour of throwing a pot of grease, causing enemies to slip, only for you to then start throwing flames or fireballs. Grease, unfortunately for those in the puddle, is flammable. Fire is even worse for those caught in it, it burns and hurts.

The thing to remember is that this is only the first act of what will be a mammoth-sized adventure. That it is mammoth-sized already is a testament to the work being put in by Larian Studios. That this takes place in one area and manages to be at least a good 25 hours of length is indicative of the depth on show. This is what I really want to praise. It's commonplace to create a large world for the player to play in. What is still sadly not commonplace is to create the depth and layers beneath that world. Baldur's Gate 3 is a beautiful, stingy, violent and abusive onion.

Every corner you turn, there seems to be a conversation to be had, a fight to be fought or a secret to be found. This is something I want to celebrate because this, even in what is a very buggy early access build, is something I have fallen in love with. You know, I can even enjoy some bugs, there's something amusing about seeing a bloke you've just killed, his body stretched like Reed Richards. You'll also find some dropped audio, glitchy animations, characters getting knocked down, standing up and getting knocked down again. It's as if the game forgot that you need to help them up first.

I've also had a few rare freezes and crashes, which will bring me into one final point I want to make. Save. If the W key wasn't so essential for moving the camera around, I'd be recommending you change the key bindings and popping quick-save onto the W key. Maybe something used a little more frequently. Now, I'm not going to advocate save scumming. Part of the joy in a game like this is seeing where your decisions and your conversations take you.

I would, however, recommend you do it pretty frequently. You will die in some very surprising ways and I've lost a few hours through the infrequency of autosaves. Had I been able to read one of Rosh's guides before playing, he recommends saving often and I'm going to emphasise that a bit more. Save. Save now. Save again in about five minutes. Hell, just create some sort of addition which quicksaves every ten minutes, you need it. Also, find the dog, save before talking to the dog and use the animal companion skill to bring it to your camp. I am advocating save scumming for that.

Know what I'm advocating more than anything? Baldur's Gate 3. This isn't a review, but I'm still going to give a sort of verdict. This is a game you can buy right now and get a massive amount of value out of. It's already incredibly detailed and this is one step on what will be a grand adventure, one that I can't wait to continue. The fact that this is limited to the one part of the game also gives you the real incentive to dig far deeper than you normally would, like the world's most avid archaeologist. It also means that when more content finally comes, you'll be able to continue with your current character as well as try the other races that are coming, seeing the difference.

This experience is unfinished, and it has got some issues, but this doesn't take away from the experience already being so much better than countless finished experiences.