Today we get to look at what is probably the first non-reference design of the Radeon R9 Nano. The design comes from the Add In Board Manufacturer ASUS and will feature a cool white shroud with a custom made PCB. The aesthetic of the cards have also been shifted from red to white-black. The output port configuration on the other hand will remain the same at 3 Display Ports and 1 HDMI. 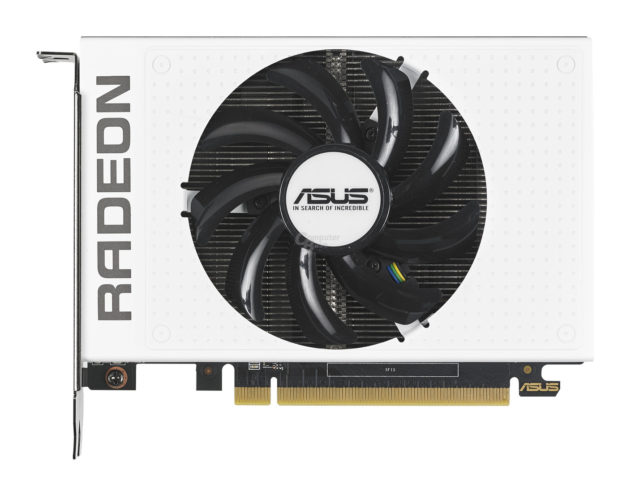 The report comes courtesy of ComputerBase.de and we get to take a cursory look at the product itself. The PCB used in this card is custom made, so the it won't just be a pretty face. While not much else is known about the card, I am willing to bet that a higher quality power circuitry (with more phases) will be used as compared to the generic flavor. This will result in a longer life span and more overclocking potential. Not to mention that the short form factor monster can really pull off the cool and collected white aesthetic. The design of the shroud however, remains the same. I suspect AMD hasn't been lenient on that count since if it had not been expressly forbidden, we should have seen a different cooler by now.

Still, the default cooler should fare pretty well considering the SFF card features an advanced power throttling algorithm that is not present on the Fury X. This allows it to remain cool (and not overwhelm the modest heat dissipation equipment) while maintaining peak efficiency. It has a core clock of 1000 Mhz. The card rocks a 4096 bit wide bus and 4GB of HBM memory clocked at 500 Mhz. The recommended power supply unit of a system with this GPU is 600Watts (with support for one 8 Pin connector). We already know the card itself has a rated TDP of 175 Watts.

The card should hit the markets soon enough and will do well in SFF builds working with a white theme. Ofcourse if you want a bit more power, you can always remove the stock cooler and slap on an aftermarket air cooler or even a liquid loop and utilize that massive overclocking headroom. Although if you are going for an R9 Nano, you shouldn't really have much real estate to play with so it might be a tradeoff.