Voltage control and memory overclocking have finally been unlocked on AMD Radeon R9 Fury series graphics cards with the latest iteration of Sapphire's renowned overclocking utility, TriXX. GPU voltage adjustments for the R9 Fury series and the R9 Fury X in particular has been a highly demanded feature. Especially so from users that wanted to take full advantage of the over-engineered and over-built power delivery circuitry on R9 Fury X cards as well as the beefy 500W liquid cooling solution.

There was simply a lot of untapped potential and performance that can only be accessed by pushing the voltages. Something that hardcore overclockers have demonstrated with their own heroic attempts by hard-modding R9 Fury X and R9 Fury X cards and push them to the very limits with liquid nitrogen cooling and the results were nothing short of spectacular.

For users that feel just as adventurous but not nearly as heroic Sapphire's latest TriXX V5.2.1 - Download Link / Sapphire TriXX Page - offers solace. AMD Radeon R9 Fury X and R9 Fury users will not only be able to over-volt their cards with the latest update but also overclock the unbelievably bandwidth rich on-board 4GB of HBM VRAM. The latest version of TriXX represents a major overhaul of the utility with a plethora of new features as well as a re-designed user interface and aesthetic design. 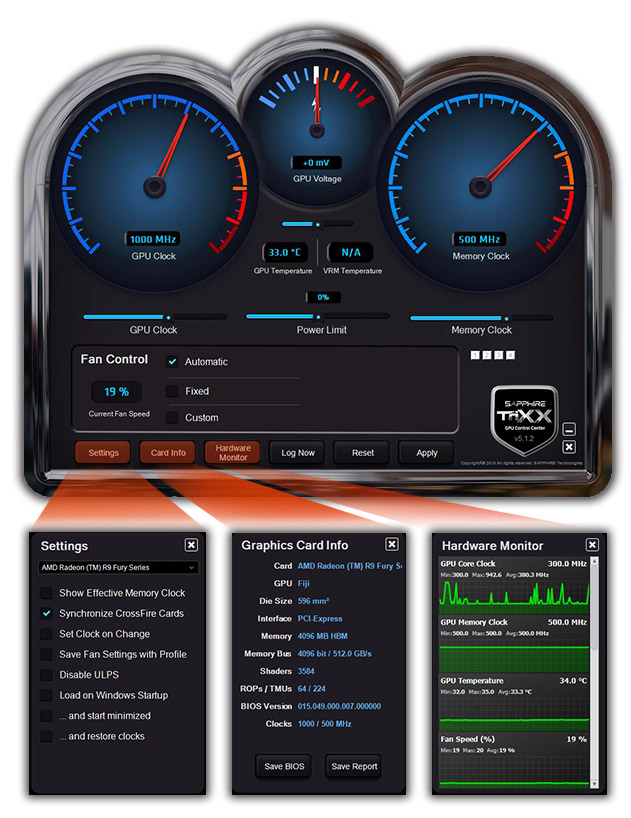 Nvidia and AMD have been fierce competitors in the graphics market for years. The competition has been so intense at times that market bystanders have described as nothing short of a figurative fist-fight between the green and red teams. Both companies are constantly evaluating the market, introducing new products, updating their pricing structures and chasing the never ending technological leap-frog.

More recently, an example of such a leap frog occurred, not with a new product introduction as is usually the case but through driver updates. In a very interesting turn of events, not only did AMD’s Radeon R9 Fury X find itself surpassing the performance of Nvidia’s GTX 980 Ti, but all GPUs in AMD’s line-up saw a sizable performance boost thanks to a driver update. 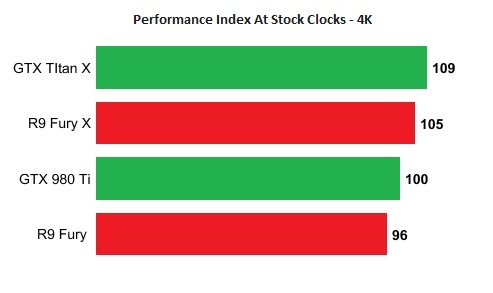 4K Performance Index According to Latest Tally by TPU

Prior to this update the R9 Fury X was in a statistical tie with the GTX 980 Ti at 4K and slightly behind it at 1440P, now the Fury X is ahead at both resolutions. We've seen what the R9 Fury X can do without pushing the voltages and the result was an average of 7.4% improvement in performance across thirteen different games. Which, to put it into perspective, is actually more than enough today to put it ahead of Nvidia's flagship, the one thousand dollar GTX Titan X.

The Titan X would re-take the lead once overclocked but at the cost of considerably more noise and significantly higher temperatures - approximately 20 degrees centigrade higher - an advantage that the Fury X maintains thanks to its remarkable liquid cooling unit. And once over-volting is factored in, which is hardware locked by default on all GeForce GPUs to preset limits due to restrictions imposed by Nvidia's greenlight program, the Fury X and Fury become even more competitive.

Overclocking has been somewhat of a talking point with AMD’s Fury X and R9 Fury  graphics cards. Mainly because no 3rd party software has been updated to recognize the voltage regulator of the cards at launch, which is necessary to enable voltage control on Fury X cards. Lack of voltage control meant that the card could not be pushed nearly as far as it can, especially with AMD’s overbuilt power delivery solution for Fury X and the 500W liquid cooling setup. This has left many users wanting more.

We’ve been hearing for quite sometime that an update for Sapphire’s Trixx overclocking software is in the works. And is aimed at solving this very issue by unlocking voltage adjustments on Fiji based cards, including the Fury X and Fury. We're glad to report that this update is finally here, but what took it so long?

The overclocking guru aka Unwinder who’s responsible for the RivaTuner GPU overclocking software that forms the backbone of almost all 3rd party overclocking tools stated that he did not receive a Fury X sample at launch. And in fact did not get hands-on experience with the card until several months after launch.

As far as memory overclocking goes, AMD announced at launch that there would be no memory frequency slider for Radeon cards with stacked memory - HBM - in the company's graphics control panel, known as Catalyst Control Center. So the memory frequency cannot be adjusted via AMD’s in-house overclocking utility. However since AMD does not impose restrictions on AIB’s we’ve seen MSI enable HBM overclocking via their Afterburner software once the "extend official overclocking limits" option was ticked. We're now seeing Sapphire unlocking this option as well in its latest update to Sapphire TriXX.

We will be conducting our own tests to see how much untapped potential higher voltages may unlock, so stay tuned.