AMD's entire family of graphics cards including the latest R9 Fury X, R9 Fury and R9 Nano have received some pretty hefty price cuts. This is the first round of significant price cuts that we've seen on AMD graphics cards since the introduction of the Radeon 300 series and the Fury series back in the summer. 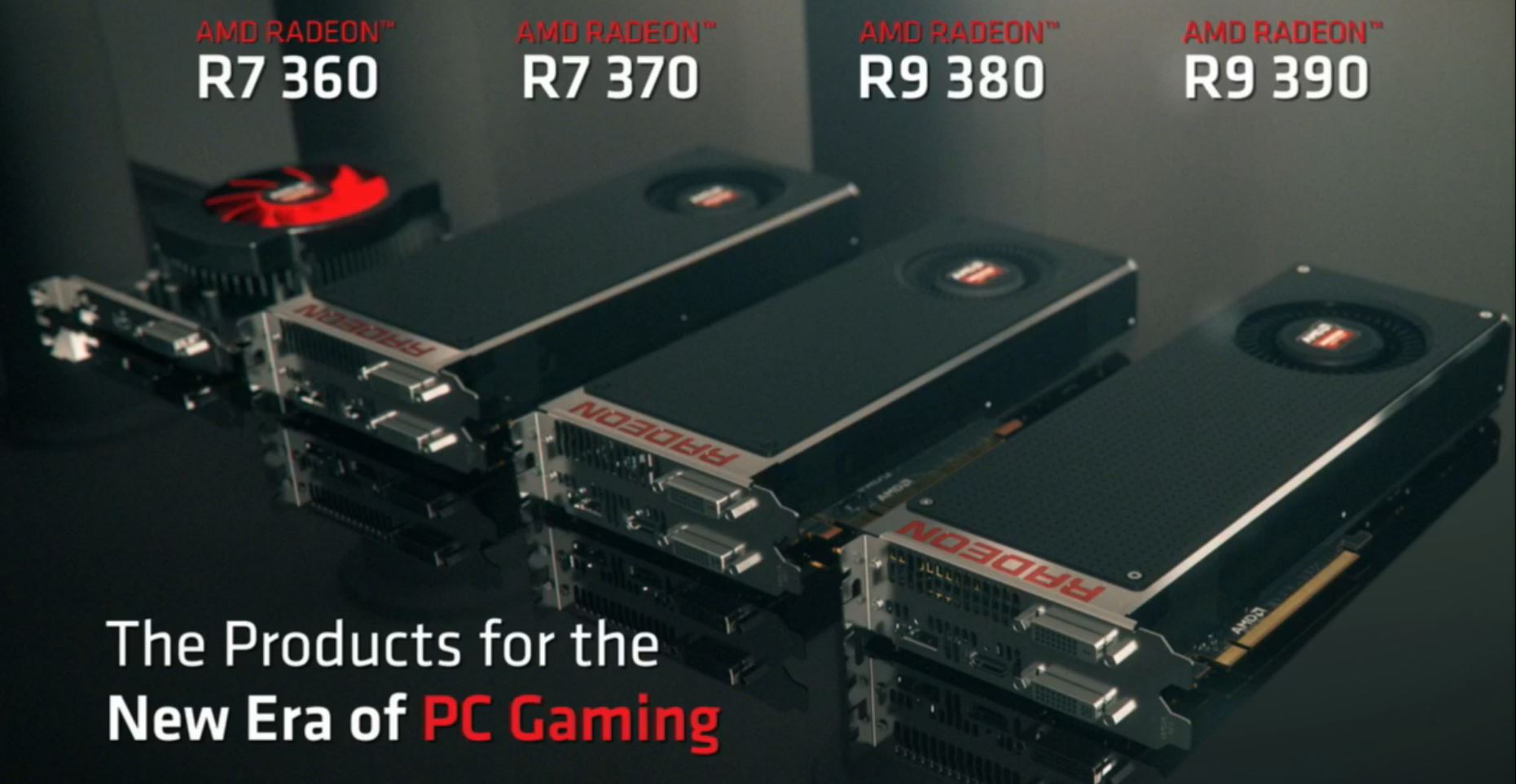 The good news is that it covers AMD's entire line-up of Radeon 300 series and Fury series graphics cards. So if you've been looking to grab an AMD graphics card in the next little while prepare to get your wallet out! because there are some seriously great deals out there right now.

More Performance For Less, Is This The Second Crimson Tide?

AMD launched the biggest driver update for Radeon owners in years two days ago in the form the Radeon Software Crimson Edition driver. The new software package came complete with performance boosts inside & outside games, more than a dozen new features and feature updates as well as a brand new user interface and control panel built from the ground-up.  If you've missed it somehow, or if you want to read our articles about Crimson again, because they're awesome, you can do so by clicking here. If you want to jump straight into the performance numbers you can do so by following this link.

Now let's get into the price cuts, starting off from the top and trickling down. Below you'll find a list of each card which includes the original MSRP for reference and the the lowest price available right now in USD, with & without rebates. You will also find all the relative links to the product listing on newegg.com and/or amazon.com.

This liquid cooled flagship AMD Radeon graphics card first debuted back in the summer and is the very first graphics card in the world to feature next generation stacked memory technology, HBM, replacing GDDR5.
Ever since the R9 Fury X launched AMD struggled to keep up with demand and the R9 Fury X was consistently in short supply. As a result many retailers began to add exorbitant premiums onto the card's price tag, pushing it well over the $649 MSRP and up to $899 in a few instances.

Thankfully however the blight of R9 fury X shortages came to an end and the graphics card has been widely available at its official $649 MSRP for sometime. But thanks to the most recent round of price cuts you can actually find it listed for as low as $569 at both Newegg & Amazon after a $20 mail-in rebate.

The R9 Nano was a card that AMD succeeded in hiding inside its sleeve and keeping it well under wraps until its debut at E3 this year, prior to that there weren't as much as whispers about the card. Nano allowed AMD to demonstrate one of the principal advantages of HBM and that's how compact it allows modern cards to be. The Nano is the fastest graphics card on the market today for its size and is the most efficient iteration utilizing the Fiji GPU we've seen to date.

The R9 Nano is the undisputed flagship of its niche and was priced as such at $649. However thanks to the recent pricing reshuffle the R9 Nano can be had for as low as $549 after a mail-in rebate and $569 without it.

The air cooled sibling of the Fury X, the Fury didn't suffer as many shortages as its bigger brother. Featuring the same Fiji GPU and 4GB of stacked high bandwidth memory, the Fury put up a good fight when it debuted outperforming Nvidia's GTX 980 across the board for a $50 premium. As of right now the R9 Fury is on average 15% faster than the GTX 980 at 1440p and 20% at 4K. 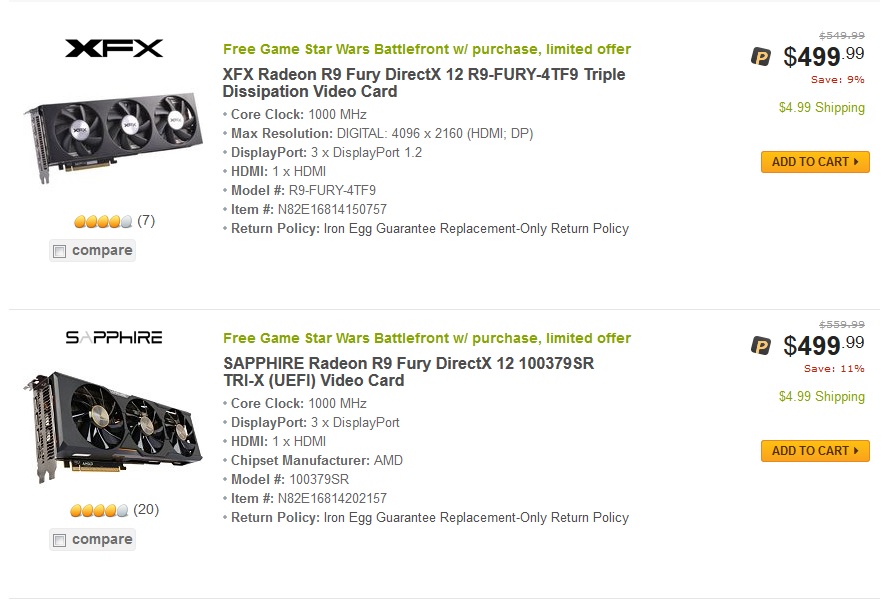 The Sapphire R9 Fury Tri-X was particularly impressive as it was the quietest enthusiast graphics card we've ever seen come to market. Besting even the quietest of the bunch, the liquid cooled R9 Fury X and putting all other enthusiast graphics cards to shame. It registered 38 decibels, 9 lower than Nvidia's own GTX 980. In other terms, enough to distinguish between the background hum of a fridge from a floor fan.

There are multiple R9 Fury cards available right now at $499 without any rebates, including the Sapphire model mentioned above.

The R9 390X and R9 390 gained popularity thanks to their large 8GB frame buffers, relative affordability & competitive performance/dollar positions.  As of right now the R9 390X leads its direct competitor the GTX 980 by a small margin at 1440P and a slightly wider margin at 4K but for a noticeably lower price tag. While the R9 390 leads its Nvidia counterpart the GTX 970 by a fair margin at 1440p which widens slightly more at 4K in favor of the R9 390 at a similar price point to the 970.

The R9 380 previously occupied the sweet-spot $200 price point but has not become far more affordable. If you're looking for the best bang for buck graphics card to play all kinds of games at a resolution of 1920x1080 with respectably smooth framerates and maybe dabble with 1440p then this is the first card that you should consider. The R9 380 is not only less expensive than its closest competitor on the green side, the GTX 960 but it's also consistently faster. Coming out ahead of the 960 at 1080p by an average of 17%, a lead that's extended even further at 1440p. 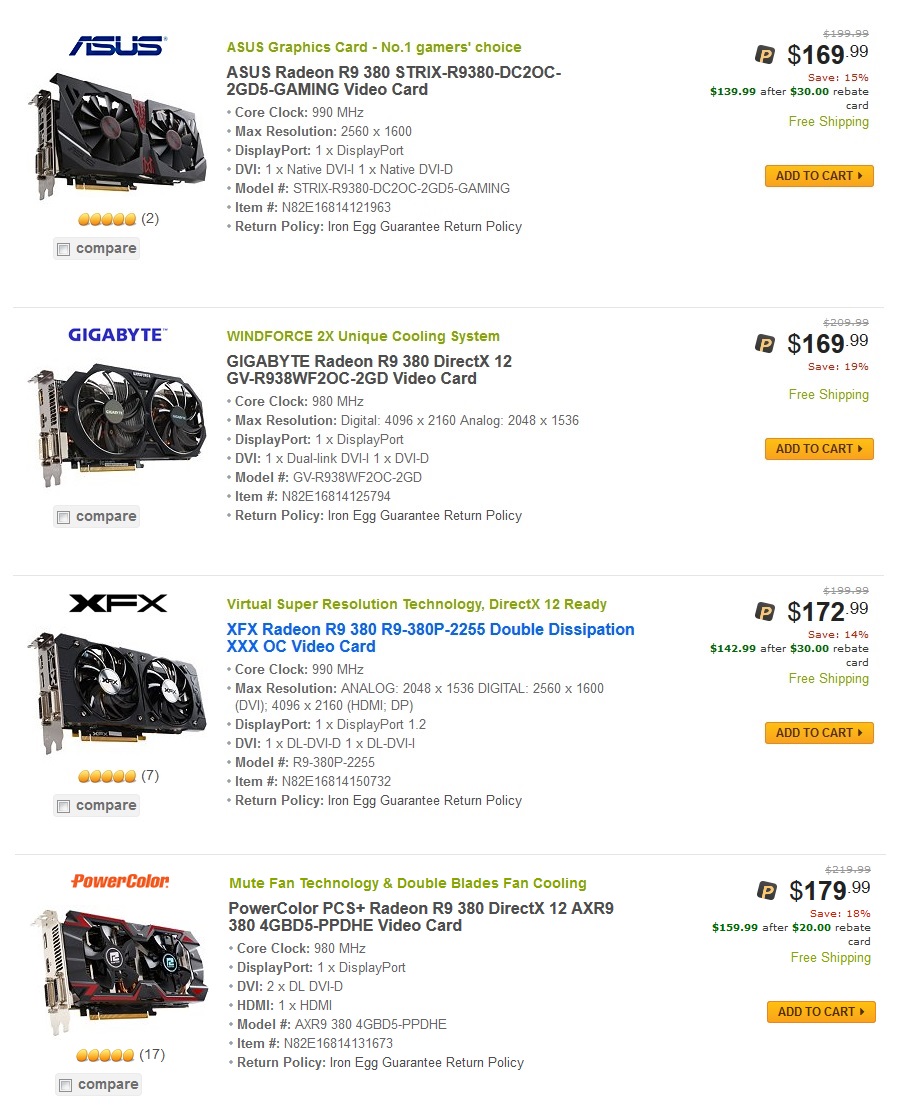 AMD has got a few things going for it at the moment. The new Crimson Edition driver is a huge step towards providing Radeon users with a modern seamless experience inside and outside of their games. Add the new price cuts for AMD graphics cards and it's almost like a double whammy. AMD Radeon GPUs are now faster, built around a software ecosystem that's far more robust and the value proposition of an AMD Radeon graphics card is now more attractive than it has been for a long while.

Finally if you're an Nvidia fan worry not, we've spotted a similar trend on the green team as well with many attractive deals showing up for the holiday season, we'll have the best of which up shortly for you to dig your teeth into!