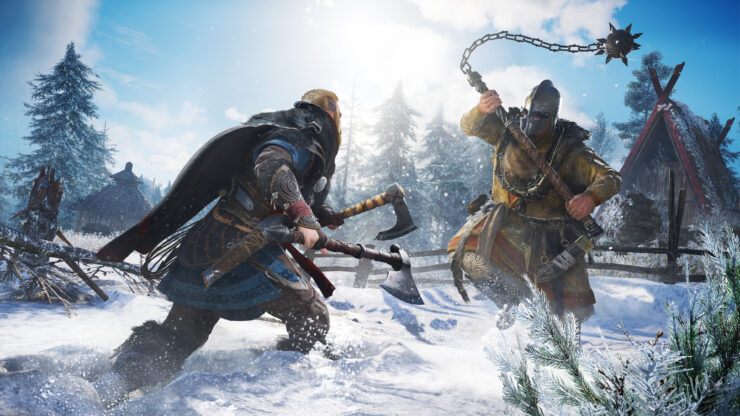 The unveiling of Assassin's Creed Valhalla is still fresh and gameplay details are coming in via select developer interviews.

Creative Director Ashraf Ismail, who previously directed the franchise's renaissance with Assassin's Creed Origins in 2017, is back at the helm for Assassin's Creed Valhalla. Speaking to the Australian website Press Start, he revealed the upcoming installment will feature a very different take on RPG mechanics. For instance, traditional levels are gone.

So in terms of RPG and progression, our goal was to actually bring in kind of a fresh new take on it. Something that is much more anchored into the world itself and into the concepts of skills and so on. We do have a very different take than what we’ve previously done, all in the hopes of actually making the Viking experience shine a bit more.

So as an example, we have this giant skill graph. It’s a really large skill tree where players can really customise the kind of Viking they that they want to play as. Hopefully people see a lot more play style customisation within that. Our angle is much more about letting players, sort of, enjoy the experience of the game as they want. In terms of of the RPG progression. So a lot of effort has gone into these skills. We have the return of abilities, but of course all the abilities are again anchored and rooted and very Viking themed We’ve gotten rid of the idea of levels as well. Instead we now have power, so again power is something that is rooted in the skill set of the hero. So based on the skills you’ve learned you gain power, and so there’s been a shift in the way we handle RPG and progression to make it a more play-style centered and focused on what players out there want to do in the game.

Ismail also said combat will be visceral and brutal in Assassin's Creed Valhalla, in order to reflect the Viking setting.

The combat system has been reinvigorated to really showcase the visceral newness and brutality of the time period of the weaponry of warfare during this ninth century. So, a lot of effort has been put into making sure of the sense of impact. We make have bearded axes, dane axes, flails, but now we’ve included the dual wielding capacity, so you can combine any two weapons in your hands. So you can dual wield two axes, two swords, even two shields if you want, so we’ve made the system quite flexible. The third element to combat improvement is the effort we’ve put into the variety of enemies, that are incredibly unique using the environment and using one another against the hero. We wanted to make sure that if you’d been playing for 15-20 hours, that you were still seeing stuff you’ve never seen before so a lot of effort has gone into the enemy side of combat.