Ubisoft is jumping into the video game market this year by rolling out two different installments in its most critically acclaimed historical open world action-adventure video game series. The first title, known as Assassin's Creed Unity, has been specifically designed for the latest consoles and PC, while the second one, called Assassin's Creed Rogue is being developed for last-gen consoles only. Both the titles are coming later this year and Ubisoft is treating the eager fans with great media content and details about the games, and today, we have a new batch of screenshots from both the games showing new protagonists, and combat. 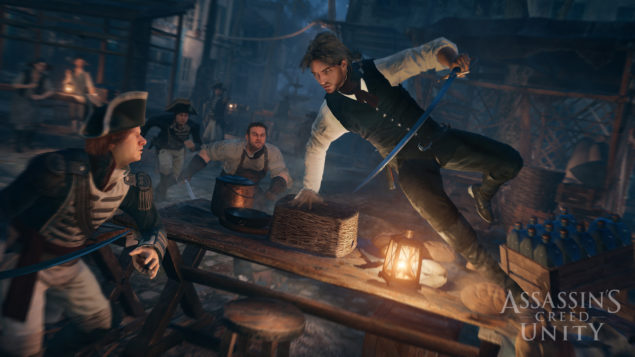 Longing to develop exclusively for PC, and the latest PlayStation 4 and Xbox One consoles, and create a perfect, transparent next-gen Assassin's Creed game that completely refurbishes the series, and at the same time, catering to the gaming need of PlayStation 3 and Xbox 360 players, Ubisoft decided to work on, and release two new installments this year in its renowned historical adventure series. Coming up against the next-gen-only titles is the Assassin's Creed Unity, and giving a chance to players with last-gen consoles to advance with their historical adventure is the Assassin's Creed Rogue.

Taking players back into late 18th century in Paris during the French Revolution, Assassin's Creed Unity goes through the story of Arno Dorian, the main protagonist of the game who was born to an Assassin but has now been adopted by Templars. The game sucks all the hardware advantages of the latest consoles, and offers improved tactical combat, stealth skills and beautiful in-game environments. On the other hand, Assassin's Creed Rogue is also set in the 18th century, but it follows through the Seven Years' War and has gameplay that is said to be similar to that of Assassin's Creed IV: Black Flag.

Ubisoft first confirmed the existence of Assassin's Creed Unity back in March, and announced Assassin's Creed Rogue last month. Since the announcement of both the games, the developer has shared several important details and related media content. Today, we have some more brand new screenshots from both the games showing in-game combat style and new protagonists/Assassins of the games, that are, Arno Dorian and Shay Patrick Cormac. You can check out these new screenshots below.