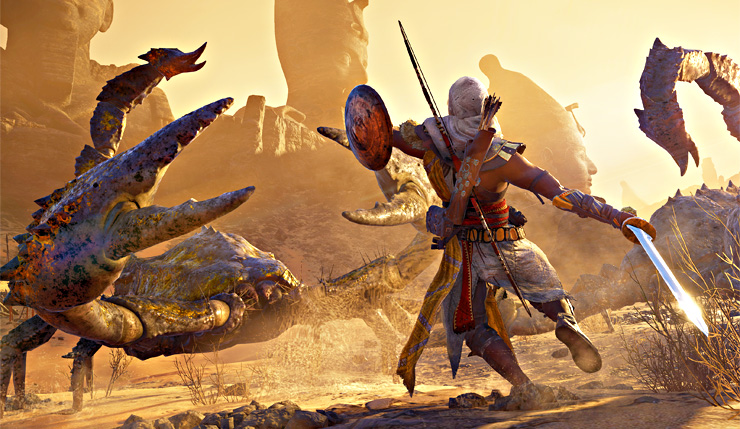 Update 1.0.3, which added Xbox One X support and new photomode features alongside numerous improvements, was released last week. Release notes for the latest 1.04 update are minimal, but mention further performance and stability improvements.

Origins was officially announced during this year’s E3 event. Development on the title began following the completion of Assassin’s Creed Black Flag back in 2014. The game includes a new game mode called Discovery Tour which allows players to explore the diverse landscapes of Ancient Egypt and learn about its rich history from audio guided tours. This new mode will be a free update for all Assassin’s Creed Origins owners available in early 2018.

In this dedicated mode, players can free roam the entire interactive 3D recreation of Ancient Egypt in Assassin’s Creed Origins, free of combat, storyline or time constraints. From Alexandria to Memphis, the Nile Delta to the Great Sand Sea, the Giza plateau to the Faiyum Oasis, players can immerse themselves like never before in the rich history of Ancient Egypt. Discovery Tour will offer dozens of guided tours curated by historians and Egyptologists, each with a focus on a different aspect of Ptolemaic Egypt, such as the Great Pyramids, mummification or the life of Cleopatra.

“From the beginning the Assassin’s Creed franchise has always explored pivotal moments in history, from the Third Crusade to the Italian Renaissance, and this year Ancient Egypt” said Jean Guesdon, Creative Director of Assassin’s Creed Origins. “It’s a dream come true for us to offer Discovery Tour by Assassin’s Creed: Ancient Egypt, an educational mode built specifically for people to learn more about the incredible history of Ancient Egypt through the interactive experience made possible via a video game.”

Assassin’s Creed Origins is available now for Xbox One, PlayStation 4, and PC. You can read our very own review right here.