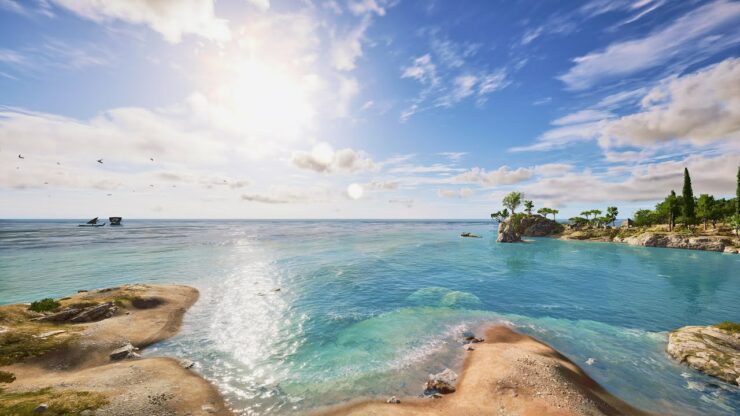 A new video has surfaced, showing off Assassin’s Creed Odyssey in 8K resolution running on an NVIDIA RTX 3090 GPU with extreme settings.

Although released back in 2018, Odyssey remains a visually appealing title – the Greek setting throughout the Mediterranean with its blue seas is still a sight to behold. So how would this 2018 title look running on a top-tier PC with ReShade Ray Tracing effects? Well, as shown in this new video from YouTube channel “Digital Dreams”, pretty spectacular.

For the showcase, Digital Dreams used Otis_Info’s photomode mod in order to properly show off the game. This camera mod packs various camera options and improves LoD. In addition, the showcase uses Digital Dream’s custom “Beyond all Limits Raytracing” ReShade preset based on Pascal “Marty McFly” Gilcher’s ReShade to improve the game’s Ambient Occlusion effects and Global Illumination. As expected ReShade raytracing effects are not to be compared with hardware Ray Tracing. It does, however,  further improve visual quality within the game.

Check out the new Assassin’s Creed Odyssey showcase in 8K resolution down below:

Assassin’s Creed Odyssey was released back in October of 2018 for PC and consoles. The title was officially announced back in June of that year during that year’s E3 event. The title received a next-gen patch for PS5 and Xbox Series X|S, enabling 60FPS, earlier this week.

Ubisoft announced a new installment of the Assassin’s Creed franchise, Assassin’s Creed Odyssey. The game will be released worldwide on October 5th, 2018, on the Xbox One family of devices including the Xbox One X, PlayStation 4 computer entertainment system, and Windows PC. In addition, Assassin's Creed Odyssey has been enhanced with additional features for Xbox One X and PS4 Pro systems. For the last three years, the team at Ubisoft Quebec has been creating an exciting new chapter for the Assassin’s Creed franchise. In Assassin’s Creed  Odyssey, the action takes place in Ancient Greece, a world rich with myths and legend, in fifth century BC during the Peloponnesian War between Sparta and Athens. Playing as Alexios or Kassandra, a mercenary of Spartan blood sentenced to death by their family, players will embark on an epic journey from a young outcast to a legendary hero and uncover the truth about their mysterious lineage.