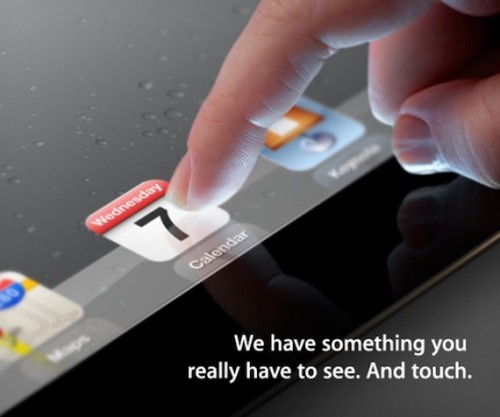 Yes people the word’s official now! Apple has itself confirmed the release date of the upcoming faster and updated version of its digital touch screen Mac OS powered tablet, the iPad 3.

Time for Apple fan boys to get their wallets ready for another big bite as in less than 7 days, all the current iPad 2’s will become obsolete with the unveiling of the iPad 3 into the market.

As per details from our sources, Apple has sent out invites to various media outlets such as the The Verge and The Loop.

Earlier, there had been reports of Foxconn sending out large cargo shipments amid tight security around the globe with ETA dates from 28th February to 6th March around the world for all the consignments.

On the other hand, Apple CEO Tim Cook will take the center stage to unveil the Cupertino Company’s latest gadget. The event is scheduled to take place at the Yerba Buena Center for Arts in San Francisco, California starting at 10 AM PST.

What improvements are you expecting with the new iPad 3? Leave your thoughts in the comments box below.