iPhone Topped U.S. Smartphone Sales for Q2 2018 Despite the Quarter Being the Slowest in Terms of Numbers

Even though Huawei beat Apple to become the second-largest smartphone brand in the world, Apple still has a tight grip on the U.S. market. The second quarter of the year is not particularly great for Apple in terms of iPhone sales as consumers usually hold out for the 2018 iPhones. However, that was apparently not enough to oust Apple as it retained the title of the leading smartphone maker in the U.S.

A new Counterpoint Research report has revealed that Apple iPhones are still the most popular smartphones across both offline and online mediums. That being said, the report is primarily focused on the online sales channel, so it hasn’t delved into more detail other than brand comparisons and has focused on retail websites instead.

As Apple probably already had seen coming, online sales did slow down, instating Apple at the 4th place with an 8 percent share of overall online smartphone sales. With a 23 percent share of the market, Amazon took the top spot, with Verizon and Best Buy trailing behind with a market share of 12 and 9 percent, respectively. 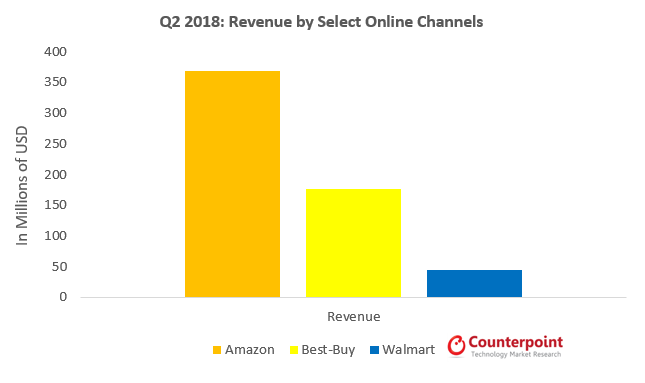 The report noted that more premium smartphones are bought through online sales channels than physical locations, but Apple seems to have skewed the numbers. Similarly, more mid-rangers and upper mid-tier phones are sold online than offline but more lower-end phones are sold offline than online. The online sales in the high-end segment are primarily driven by Apple’s online store and to some extent, Samsung’s. 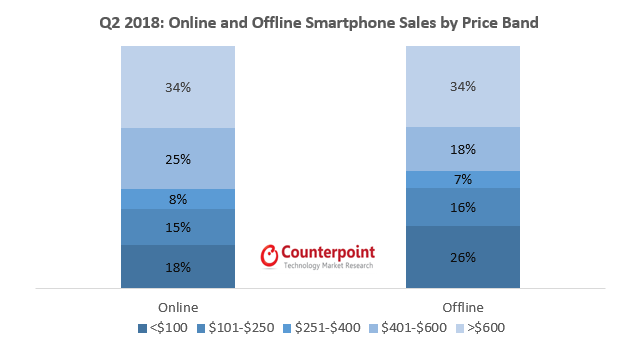 However, these results are exclusive to the U.S. market only. On an international front, Huawei has recently surpassed Apple to become the second-largest smartphone brand in Q2 2018, according to a report by Gartner. However, with the upcoming release of the 2018 iPhones, Huawei might fall back to the third position in Q3 2018 again.