As we have already shared with you, quite a few rumors are suggesting that Apple will launch an iPad with a larger screen hitting at 12.9 inches. The tablet is being named as "iPad Pro" in the tech lounges and is rumored to be launched as early as this year's third quarter.

Previously too, we got to some speculations that Apple is planning to launch an "iPad Pro" with 4K display screen (whoa!?) along with a version sporting Ultra HD display. This new rumor is also hinting at same timeline, although, doesn't mention any display details. Remember, a lot is being discussed about Apple presenting a true hybrid of laptop and mobile computing. 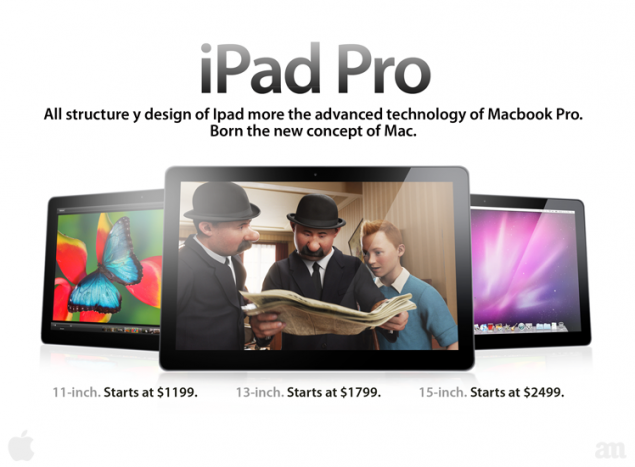 The current rumor is coming from a Taiwanese publication DigiTimes. The site is claiming its sources being "market sources" and claims that Apple will release the bigger iPad with 2732 × 2048 pixel density by the end of third quarter of 2014.

Samsung’s recent launch of its 12.2-inch model is expected to propel Apple to accelerate development of large-size iPads. Market sources indicated that Apple is likely to release a 12.9-inch model by the end of the third quarter at the earliest.

Meanwhile, Apple reportedly has asked its production partners and component suppliers to develop new models of 7.9- and 9.7-inch tablets, added the sources. - DigiTimes

According to DigiTimes, Apple is working with production partners and suppliers in developing the next gen iPad Air, Retina iPad Mini and the unofficially named "iPad Pro" models. We can't wait to see if Apple gets successful in giving us a machine that could give us the power of a Mac Pro and the ease and mobility of an iPad.