Apple's special event kicked off a little while ago and already we have been treated to a new product. The company has formally announced the new 13 inch Macbook Pro. It was revealed that the 13 inch Macbook Pro is actually Apple's most selling notebook. So in its true fashion, the company took its most popular product and made it even better. 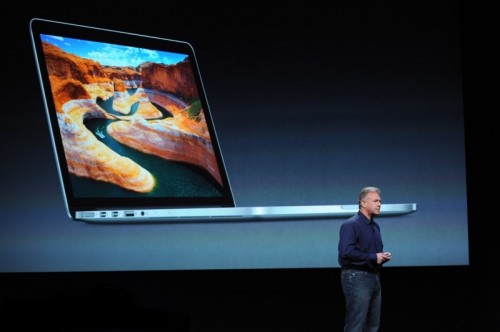 The new 13 inch Macbook Pro from Apple comes with some great new updates. First and foremost, the notebook is 20% thinner than its predecessor. The thickest point being .75 inches. It is also almost a full pound lighter than the previous 13 inch Macbook Pro, weighing in at just 3.5 pounds making it the lightest Macbook Pro ever. It comes with MagSafe 2, dual Thunderbolt ports, SD card slot, HDMI output and dual USB 3.0 port. There is obviously no optical drive. Best of all, there is Retina display.

New 13 inch Macbook Pro now comes with Apple's infamous Retina Display pumping out an impressive 2,560 x 1,600 resolution, four times that of the previous model. It has almost twice the resolution of a 1080p full HD display. As compared to the previous model, there is a 29% higher contrast ratio and 75% reduced glare.

As is the custom with Macbooks, this particular one comes with Facetime HD camera capable of 720p video recording, stereo microphones and speakers, backlit keyboard and the iconic oversized glass multitouch trackpad. 802.11n WiFi, Bluetooth 4 and Intel HD 4000 graphics are standard. Users have the option to get up to 768GB of flash storage, 8GB of RAM or Core i5 or i7 Ivy Bridge processors.

Pre-orders of the new 13 inch Macbook Pro start today. The base model with 2.5GHz Core i5 processor, 8GB of RAM and 128GB of flash storage will set you back $1,699. Apple starts shipping this new notebook, today.