We always expect the latest devices to offer more with less space and expense. Giga.de posted an image recently that elegantly captures the new approach chosen by Apple for the 2013 Mac Pro, widely named trashcan. It compares the Mac Pro 2012 vs Mac Pro 2013: the obsolete and the latest.

It highlights the fact that MacBook Pro 13, while offers a very interesting design and is intended to be a professional machine, requires users multiple disks, SuperDriver banner and others to install. The comparison somewhat understates the problem as the pile and mess of cables and devices would be no less. Following are only some of the devices that would be required to be installed in Mac Pro latest separately: 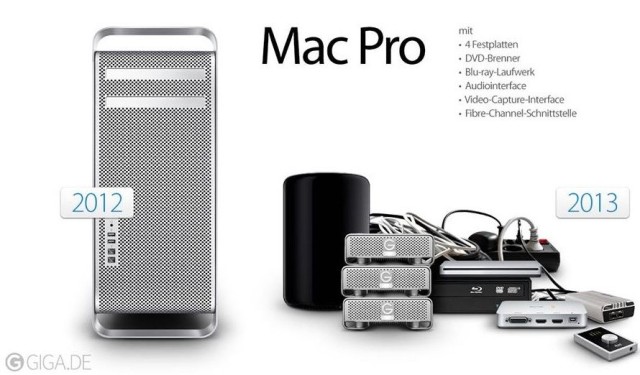 It is not that many users need a DVD or a BluRay burner and all those drives for that matter, but for those of Mac Pro users who have some expensive collection of SSDs and big hard drives, their pile won't be small. Though there are multiple-drive enclosures, however, this all adds up to a lot of external gear making the pile huger than required.

There has been lately a debate on how Apple can cater to this problem: the company could mitigate the pain by offering three break-out box products, probably going with a Thunderbolt 2 for the drive:

Built to Apple standards, it could work wonders. However, it doesn't look likely if Apple would address to such a market.