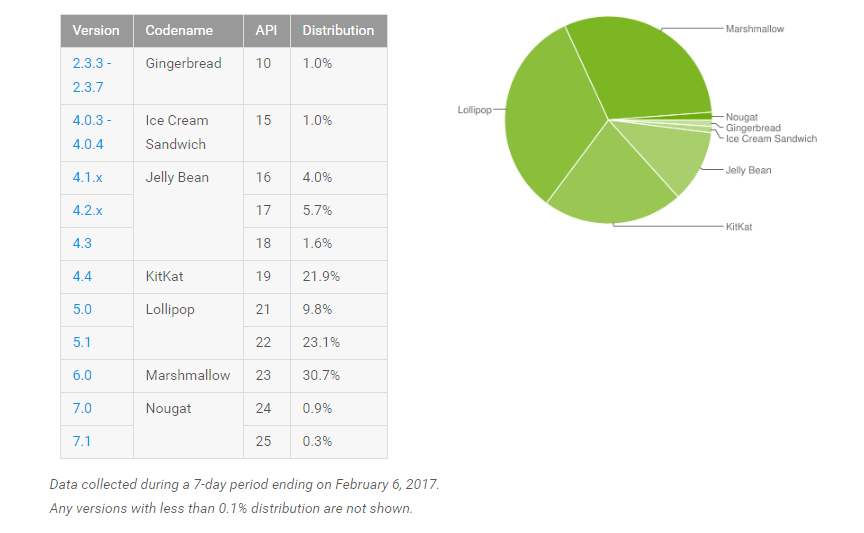 We don't see any significant change in the stats from January, but there are little changes in Nougat's adoption rate, finally reaching above 1% mark. Android 5.0 and 5.1 Lollipop still maintains its stronghold on the chart with 32.7% active devices running on it. While Android 6.0 Marshmallow is also not far behind Lollipop, it is quickly gaining ground with 30.7% active Android devices. Going by the trends, we could expect Marshmallow to overtake Lollipop and have the largest share on the chart. Maybe in April, we shall see Marshmallow exceeding the current numbers by a legit mark.

The rise in Nougat adoption could be because of recent Android 7.0 and Android 7.1 updates rolled out by major manufacturers such as Samsung, Sony, Motorola, and others. The fact that Gingerbread (released on 2010) is still surviving on 1% active Android devices is proof that as an operating system, Android takes a plunge when it comes to even distribution of updates to every device. Most of the OEMs promise two years of update warranty, but not every manufacturer keeps the promise. In one of the recent cases, Moto E3 and Moto E3 Power (launched in September 2016) were denied any further updates by Motorola.

Android distribution data is collected during a seven-day trial period, which ended on February 6 for the latest chart. The major responsibility for update rollout depends on the OEMs. Most of the upcoming devices are expected to come running Android 7.0 Nougat out-of-the-box, which could increase its distribution share further.

It remains to be seen that how many manufacturers push Android Nougat update this month. If February witnesses more of such update rollouts then we can expect the next distribution chart to have better stats for Nougat's presence on active Android devices. With MWC (Mobile World Congress) 2017 event around the corner, we could expect major Android flagships to come with Nougat OS.