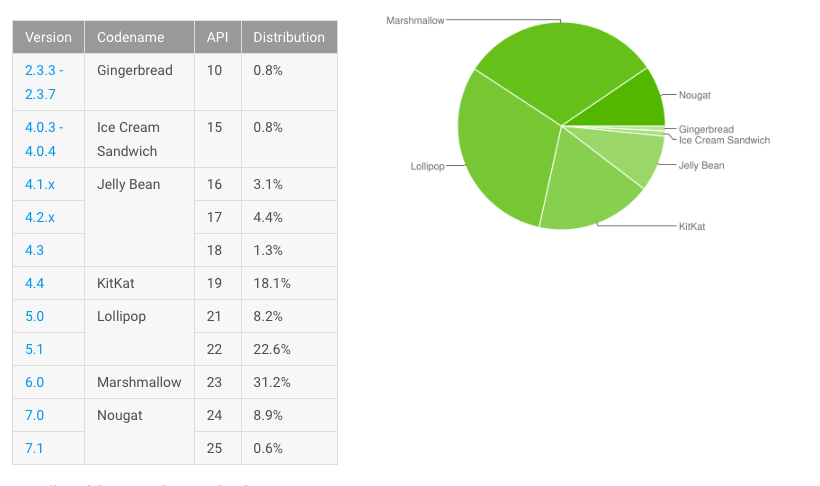 Every month, Google releases the distribution chart for its Android versions to let everyone know about the percentage of devices running on specific versions.

In the latest distribution chart, Nougat can now be seen running on 9.5% of Android devices. Android 7.0 witnessed a growth from 6.6% in May to 8.9% in June, while Android 7.1 grew by a dull percentage and is now running on 0.6% of total Android devices. Only a very few non-Google devices are running Android 7.1 version, which is why its distribution percentage is pretty low. However, we can expect a slight jump in its adoption as devices like Moto Z Play and Nextbit Robin are getting updated. Also, the upcoming devices like Moto Z2 Play and Essential Phone are launching with the same version.

This time as well. Marshmallow remains stagnant at its percentage with 31.2% share on the chart. In the May distribution chart, Android 5.0 and 5.1 Lollipop turned out to be the most used version, but in June, the percentage has fallen to 30.8%. It means that Marshmallow is the most popular version with the highest share on the pie chart.

The next on the chart is Android KitKat with 18.1% of share, JellyBean with 8.8%, and both Ice Cream Sandwich and Gingerbread (version 2.3.3 to 2.3.7) at 0.8%. Google derives these numbers from Android devices that logged into the Play Store in a seven-day period that ends on June 5th.

Besides, Google has also upgraded its OpenGL version distribution numbers. The OpenGL 3.0 is at 44.6 percent while OpenGL version 2.0 is on the rise with 38.7%.