Later we saw some great looking screenshots of Samsung's Galaxy S5 running Android 5.0 leak as well. When compared with previous screenshots, the images suggested that progress was going quickly over at Samsung, with the company looking to hold true to its promise of Android 5.0 coming to the S5 starting November. And now, more screenshots have surfaced, this time showing LG's G3 running the Android update. 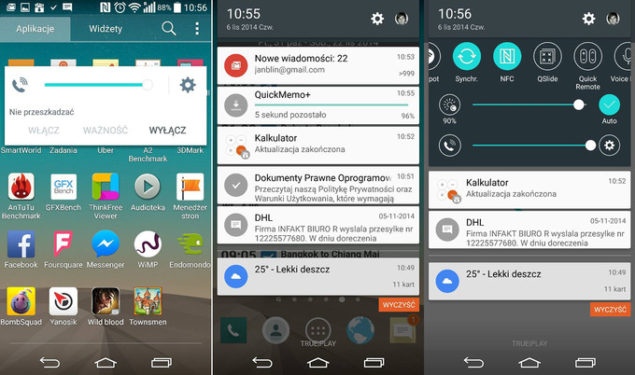 If the images posted by lifeisgoodblog are authentic, then it seems that folks over at LG are already hard at work to bring their flagship device to Android 5.0 as well. The changes in the images are not that extensive as those seen in leaked shots for the Galaxy S5. They show updates primarily to the way notifications appear on the LG G3, with notification updates resembling Google's changes to Android more.

Other minute changes such as a round profile picture icon, animations and shadows also appear similar to Android 5.0 The source for the images also claims that Android 5.0 for the LG G3 can be expected in the next few weeks which means that Samsung's South Korean counterpart is also hard at work and will bring Android 5.0 to its device at a similar pace. LG's G2 is also expected to get an Android 5.0 update sometime early 2015.